IAG - which owns Aer Lingus, British Airways, Iberia, Vueling and Level - is looking to make a takeover deal with the Scandinavian airline within a year. The low-cost airline had an incredible July, carrying a record 3.8 million people. 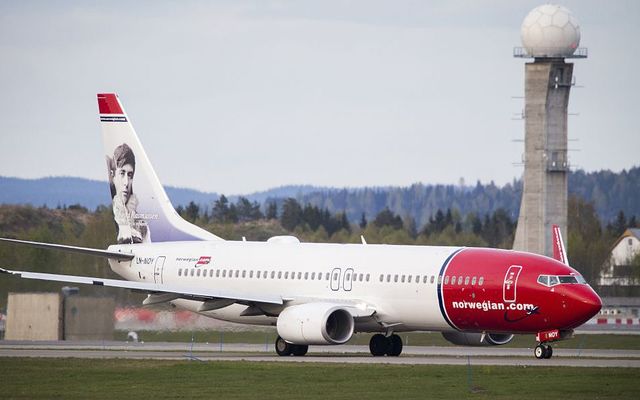 Picture taken on May 2, 2014, shows a Boeing 737-33S operated by Norwegian Air Shuttle on the tarmac at the Oslo Airport Gardemoen. AAS, ERLEND/AFP/Getty Images

Norwegian Air experienced a 13 percent increase in passengers in July 2018, reaffirming their new foothold in the transatlantic market.

The low-cost Scandinavian airline Norwegian Air has had a record-breaking July 2018, clocking up a 13 percent increase in passengers from July 2017. The airline is said to have carried 3.8 million passengers in July alone, with a load factor of 93 percent.

"We have been through a long period of strong growth and going forward we will reap what we have sown for the benefit of our customers, staff and shareholders," said Norwegian CEO Bjorn Kjos.

Throughout the last year, the airline has continued to add to its transatlantic service from Ireland adding new routes, extra flights and transforming the options available for those looking to travel between the US and Ireland. In July they also reported a net profit of NOK 300 million ($366 million) for the second quarter of 2018, which was aided by a dip in fuel costs.

As Norwegian continue to grow, International Airlines Group (IAG), which owns transatlantic rivals Aer Lingus, British Airways, Iberia, Vueling and Level, is now looking to secure a takeover deal with the Scandinavians, giving the airline a year for a definite deal.

Having purchased a 4.6 percent stake in Norwegian earlier in 2018, IAG is now hoping to make an outright bid for the budget carrier.

"There's no immediate hurry. But this time next year, if we haven't acquired Norwegian, we won't be holding those shares," IAG boss Willie Walsh told the Irish Independent.

"If we're not acquiring it, we're not interested in being a shareholder. We'll wait and see what happens, but it's not a big issue on our agenda."

Walsh had previously stated that Norwegian’s low-cost fares were unsustainable. In February 2017 as the first fares with Norwegian from Ireland to the US were sold, he argued: I’ve always said we’ll compete with Norwegian. The difference between Norwegian and us is we’re profitable.

“The fares that they’ve launched are clearly just designed to get some headline media coverage. They’re not sustainable.”

Aer Lingus itself came under the control of IAG in 2015 when it experienced an immediate spike in profits.

Walsh’s comments on the sustainability of Norwegian’s fares were echoed by Ryanair chief Michael O’Leary, who denied claims that he also attempted to court the airline in May 2018.

“We have not made an approach to Norwegian and we have no interest. Our CEO has repeatedly said we believe (Norwegian Air Shuttle) will go bust as oil rises to $80 a barrel and we don’t catch falling knives,” a spokesperson for Ryanair said.

Who is your favorite airline to fly to Ireland with? Let us know in the comments section below.