"The family... have no idea how long they will remain in Ireland or whether they ever will return to Ukraine." 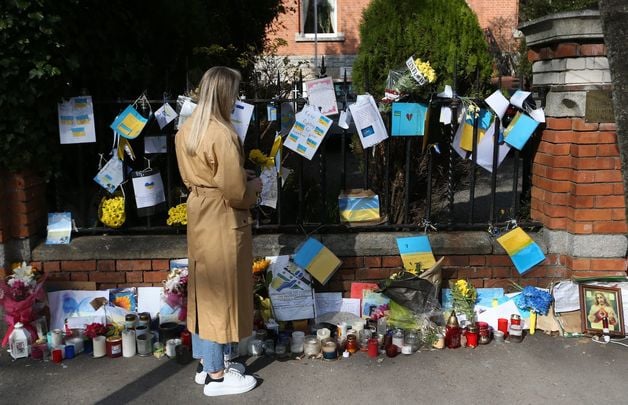 Up to 40k refugees from war-torn Ukraine are expected to arrive to Ireland by the end of March with Irish families and businesses welcoming them with open arms.

War baby Zlata Tysymbal will one day hear how she was just two weeks old when she became a refugee in Co. Leitrim while her father remained behind to battle against invading Russians in her native Ukraine.

Zlata, who was born two days into the war, is one of 10,000 refugees from her country who have arrived in Ireland seeking shelter and aid from President Vladimir Putin’s troops.

The Irish Times reported that two hours after her birth in a hospital in Brovary, Ukraine, air raid sirens sounded and Zlata and her mother were taken from the ward to an underground bunker with dozens of other women and newborns.

Her father contacted friends in Ireland pleading for refuge for his family after a rocket exploded at a military checkpoint 100 meters from their home.

Ivan Tarkovych, a Co. Leitrim-based native of Ukraine who has lived in Ireland for 20 years, said, “They saw a rocket pass their window. They thought their house would fall like cards.”

Tarkovich and his wife Diana managed to get more than two dozen people, including their own mothers, siblings and friends, out of the war-torn country in the last two weeks.

Zlata, in the arms of her 32-year-old mother Oleksandra, and brothers  Svatoslav, aged two, and Danylo, aged 11, crossed the border into Slovakia after a grueling train journey from Kyiv and later got a flight from Bratislava to Ireland. They arrived in Leitrim less than two weeks ago.  They are now in a former nursing home in the village of Kilclare.

The family, like 10,000 more who have already arrived and thousands more expected in coming weeks, have no idea how long they will remain in Ireland or whether they ever will return to Ukraine.

But families all over Ireland have opened their homes to them. The amazing Irish welcome is unlikely to attract any kind of state financial compensation like the £350 a month the British government has offered its citizens who give a spare room or property to war refugees in the U.K.

Tanaiste Leo Varadkar indicated that while such a scheme had been discussed, it was not being planned in Ireland.

“What we are really saying to people is that it is an altruistic thing, not something we would intend to pay people to do,” he said.

Varadkar said that while nothing could be ruled out in the future, there had been about 20,000 offers of accommodation to the Irish Red Cross and “nobody has asked for money at this stage.”

He and his partner, Matthew Barrett, have offered to take in Ukrainian refugees.

Minister for Children Roderic O’Gorman on Sunday said efforts to accommodate Ukrainian refugees would focus on hotel rooms and vacant properties offered by the public before spare rooms in people’s homes were considered.

He said about 4,500 refugees were being accommodated in hotel rooms, while others were staying with family and friends. The focus would next be on the 2,000 or so vacant properties put forward during an Irish Red Cross drive and then on the spare rooms available in people’s homes.

O’Gorman said he expected “tens of thousands of Ukrainian refugees” would need accommodation in the weeks ahead.