Lady Chief Justice Dame Siobhan Keegan said in the Belfast High Court's ruling that the decision not to prosecute Bloody Sunday's Soldier F was illogical and "crossed the threshold of irrationality". 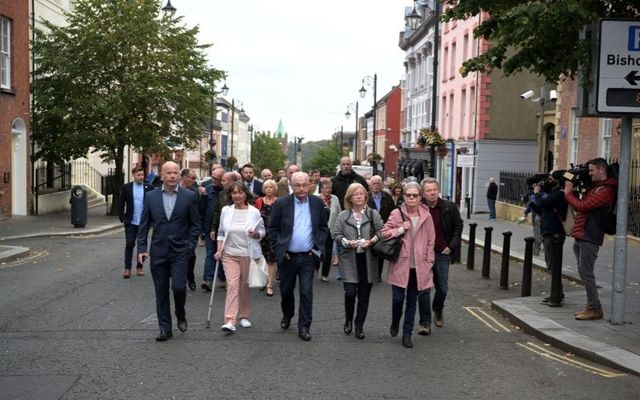 The Belfast High Court has quashed a decision by Northern Ireland's Public Prosecution Service (PPS) to discontinue the case against Soldier F, the British Army veteran accused of the murders of James Wray and William McKinney on Bloody Sunday in Derry.

Lady Chief Justice Dame Siobhan Keegan said in her ruling that the PPS must reconsider its decision, adding that the decision not to prosecute Soldier F was illogical and "crossed the threshold of irrationality".

The PPS announced last year that it was discontinuing the case against the former Parachute Regiment soldier due to concerns that the case could collapse after Soldiers A and C were acquitted of the murder of Joe McCann following a separate court ruling on the admissibility of evidence.

However, the McKinney family launched a judicial review to challenge the PPS decision.

Lady Chief Justice Keegan delivered the verdict on Wednesday, stating that the matter should remain with the PPS.

"We consider that the decision crosses the threshold of irrationality where it simply does not add up, or in other words, there is an error of reasoning which robs the decision of logic. It follows that the matter should remain with the PPS to reconsider the decision," Keegan said on Wednesday.

"There has already been considerable delay in the criminal process and so it may be that the swiftest and most effective course is actually for the district judge to be asked to rule on the admissibility issue in the first instance," Keegan said.

However, the High Court dismissed judicial reviews taken by several other Bloody Sunday to challenge the PPS decision not to prosecute five other British Army veterans. Keegan said there was "no error in law" in those decisions.

Northern Ireland's Director of Public Prosecutions Stephen Herron responded on Wednesday, saying in part: “The team involved in the Soldier F prosecution will take time to consider the full detail of the written judgement, when available, and its impact on these proceedings.

"We will update the District Judge and the parties directly involved in the Soldier F prosecution on the outcome of this process at the earliest opportunity.

“Today’s ruling also upheld the original PPS decisions taken not to prosecute other soldiers reported in relation to events on Bloody Sunday in January 1972.

“I would like to acknowledge the lasting pain and frustration of the families involved in these Judicial Review proceedings and their wider campaign for truth and justice. It is important that we effectively engage with the families and we are committed to doing so.”

Ciaran Shiels of Madden & Finucane, the solicitors who represented the McKinney family in their now successful challenge, said on Wednesday: “We warmly welcome the decision of the Divisional Court today to quash the decision of the PPS to discontinue the prosecution against Soldier F for 2 counts of murder and 5 counts of attempted murder.

“The PPS must now review its decision taking into account this court’s judgment, and properly applying the principals and guidance provided today by it. We would call upon the PPS to move immediately to re-institute the proceedings at Derry District Judge’s Court against Soldier F and to secure his committal for trial in the Crown Court.

“The families continue to be vindicated in their long pursuit of justice.

“We will now study this long and complex judgment and consider if there are any further legal remedies available to families in respect of whom there will be no prosecution of any soldier.”

Speaking on behalf of his family, Mickey McKinney, brother of William McKinney, who brought the successful legal action said: “We are delighted for our own family but also for the family of Jim Wray and those who were wounded in Glenfada Park.

“It was with regret that we were forced to bring these proceedings in the first place but the PPS did not engage with us properly in respect of its decision making, but in fact came to Derry last July and presented us with a determination it had already decided upon.

“As the Court has remarked today, this was in breach of the Charter for Victims and forced our hand.”

No British soldier has ever stood trial for the events of January 30, 1972, when British paratroopers opened fire on civil rights protesters on the streets of Derry. 26 people were shot, 13 of whom died that day and one who died from his injuries a few months later.