Kate Browning was born and raised in Belfast during the Troubles. She currently represents Suffolk County’s 3rd Legislative District. 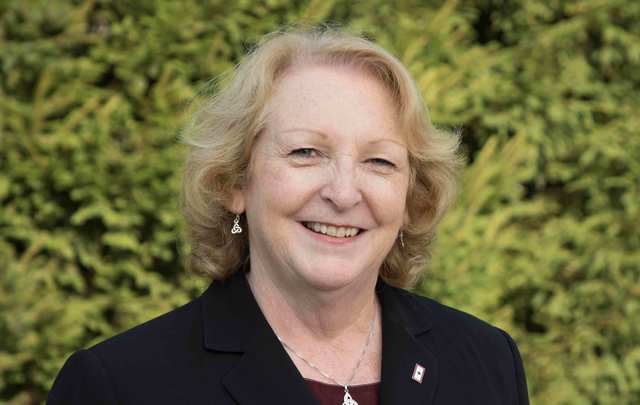 And if she makes it to Capitol Hill, she might just well roll up in a bus.

Browning, who was once a school bus driver, is a military mom and a Suffolk County legislator, announced this week that she will be mounting a challenge in next year’s midterm election for New York’s 1st Congressional District, currently represented by Congressman Lee Zeldin, a Republican and an Iraq War veteran.

And if the race couldn’t be any closer in terms of local ties, Browning drove that school bus for the high school district that Zeldin graduated from.

And both the Browning and Zeldin families call the Suffolk County town of Shirley home.

“Our district deserves a representative that is going to fight for working families in Suffolk County. I worked as a school bus driver while my kids were in school and I know what it’s like to struggle to make ends meet on Long Island,” said Browning, a Democrat, in her official announcement.

“That’s why I decided to run for legislator and why I’m running for Congress. To fight for working families of the district.”

Continued Browning: “When I first ran for office as a school bus driver against an incumbent who was part of the political establishment, no one thought I could win, but I did.

“I was repeatedly reelected because I never forgot where I came from and who I am there to represent.

“I fight for the bus drivers and other working families who are struggling to make ends meet. I have dedicated myself to making a better Suffolk County for all those kids to grow up in who rode on my bus, including Lee Zeldin. Unfortunately, in Congress, Lee Zeldin hasn’t stood by those kids.

“Here in Suffolk County, I’ve worked across all party lines to help Suffolk’s struggling families. But Lee Zeldin and the Washington establishment would rather just play partisan political games.

“And I’ve delivered for the district. I’ve made Suffolk County safer by passing one of the toughest sex offender laws in the country and ensuring that we graduated one of the largest police classes in Suffolk County history.

Read more: No increase in Irish being deported under Trump

“I’ve focused on quality of life issues, rehabilitating foreclosed zombie homes and selling them to first-time homebuyers, keeping them away from speculators and absentee landlords. And I’ve secured funding for clean water infrastructure to protect our drinking water and our shorelines.

“There’s so much more work to be done and our congressman, Lee Zeldin, cares more about voting straight party lines and becoming part of the Washington Republican Leadership than standing up for what’s best for his constituents. We need a representative in Congress who will be an independent voice with a proven record of working to tackle the serious problems our country faces.

“With the support of my family, I’m excited to travel the district listening to residents and continue fighting for Suffolk County.”

A statement from her campaign said that she had “successfully controlled spending and held the line on taxes, cracked down on illegal housing, and made protecting our precious environment a focus.”

Before taking office said the statement, Browning worked as a school bus driver for the William Floyd School District in order to make ends meet and have the same hours as her children while they attended school.

She and her husband, Steve, are the proud parents of Aoife, Sean, and Aodhan. They have three grandchildren.

Browning was born and raised in Belfast during the Troubles.

At 19, she left Belfast for Germany, where she met Steve, who was serving in the U.S. military and later joined the New York Police Department. In 1989, she and her husband settled in Shirley.

Said the campaign statement: “Kate is proud of her husband and her sons, Sean and Aodhan, who are serving their country in the military.

“Steve is a decorated Detective in New York City Police Department and retired from the Army National Guard in 2006. Sean and Aodhan serve in the Air National Guard, 106th Air Rescue Wing, Westhampton, and Sean has served three tours in Afghanistan. Kate avidly supports our service members overseas and their families here at home.”