The St. Pat’s for All parade, always based in Sunnyside, Queens, will step off virtually this Sunday, March 7, at 2 pm EST. 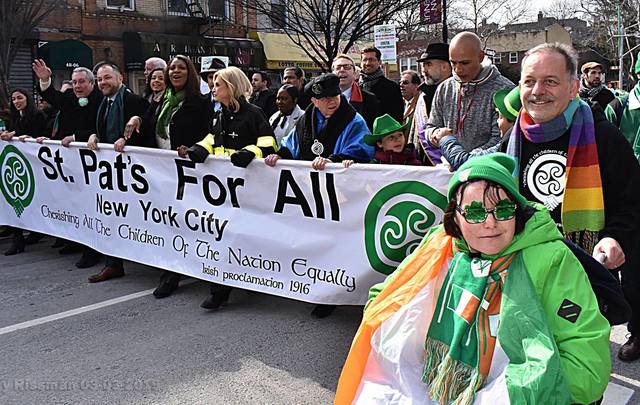 St. Pat's for All 2021 will be dedicated to Tarlach MacNiallais, who died from Covid-19 last April.

“When the NYPD let us know that all parades in New York are canceled for the coming months, we had a quick learning curve and began organizing,” parade founder and co-chair Brendan Fay said. “For over 20 years, we’ve gathered on Skillman Avenue making our way through Sunnyside and Woodside.”

St Pat’s for All 2021 is dedicated to the memory of Tarlach MacNiallais, who died from Covid-19 last April, just a few weeks after last year’s parade.

“Tarlach was a much-loved advocate for LGBTQ rights in Belfast and New York,” said Fay. “For 30 years he worked with AHRC, an agency for people with disabilities. Our hearts are with his spouse Juan here in Sunnyside and his family back home in Belfast.”

A film tribute by Fay and Ed Caraballo will be part of the virtual program.

“More than ever, we in the Irish diaspora are finding ways to look out for each other as we celebrate our heritage and culture,” Fay added.

“This year of Covid has been a hard time of loss, sadness, and struggle for many. Months of social distancing has taken a toll. In the hardest of times, the New York Irish have responded compassionately joining efforts to reach out to the food-deprived communities across the city.”

Fay said he and parade co-chair Kathleen Walsh D’Arcy felt a responsibility to create a joyful and caring virtual program of musicians, artists in Ireland and in New York who have been meeting and recording on Zoom for the March 7 celebration, with the goal of filling the virtual space during St. Patrick’s season.

Among the legends from the Irish music world, Mick Moloney will perform a song celebrating the San Patricios, the Irish soldiers who fought for Mexico in the 19th century.

Across the virtual divide, he will be joined by singer Liz Hanley in Boston, accompanied on fiddle by Athena Tergis in Italy and percussionist Brian Fleming in Clare.

Renowned musician David Amram is playing an Irish tune he says he learned in Hells Bells with his friends Malachy and Frank McCourt and Moloney and shares a story about playing the Irish tin whistle onstage with Dizzy Gillespie.

Linking with youth from the Shannon Gaels in New York, boys and girls from Drogheda, Co. Louth filmed a message inspired by the Seamus Heaney poem ”Cure at Troy.”

“While we will miss the marching and rolling up Skillman Ave, St. Pat’s for All 2021 brings us together at the virtual crossroads in a joyful trans-Atlantic celebration of welcome, remembering, and solidarity,” Fay said.

To stream the parade, visit the St. Pat’s for All website at www.stpatsforall.org.