LIVE NOW: Live music and performances from Cork this Thursday!

Other Voices: Bringing It All Back Home will be live streaming from University College Cork (UCC) this Thursday, September 29 - tune in here! 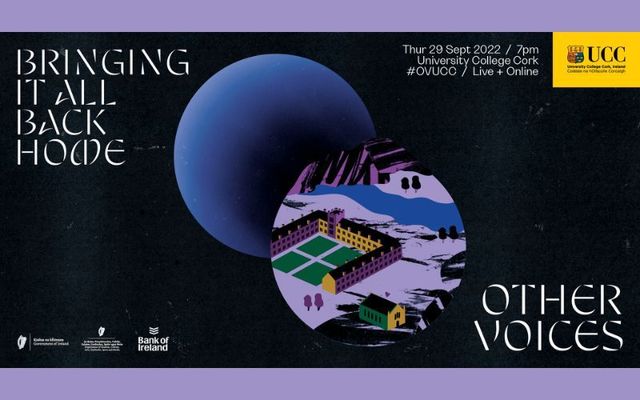 Other Voices is heading to University College Cork (UCC) to present a spectacular night of music live streamed from UCC’s striking riverside campus this Thursday, September 29.

Other Voices: Bringing It All Back Home will be live streamed from UCC’s Aula Maxima, Honan Chapel, and Glucksman Gallery for what promises to be an unforgettable night of music and song in Cork.

IrishCentral is delighted to again be teaming up with Other Voices for its Bringing It All Back Home event this Thursday, September 29 at 7 pm  (GMT+1) / 2 pm (EDT). The special performance will be live streamed here on IrishCentral as well as on IrishCentral's Facebook page:

For Other Voices: Bringing It All Back Home, students, staff, and alumni of UCC, together with the public, will share in music’s great power to bring people together to celebrate collectively, as the University celebrates a return to campus life.

The celebrations will commence with Other Voices of UCC, a free public concert in the Hub. The Violet Club will headline this concert which starts at 5:30 pm on September 29. Other acts by UCC students and staff in the line-up include Goa, a pipa performer from China, an opera performance by Grace Murphy, a rap performance by Raphael Olympio, and a lively session by the UCC Traditional Society. The event is open to all on a first come first serve basis. After the concert, the Other Voices main event will be live streamed on screen in the Hub from 7 pm.

Philip King, South Wind Blows Producer, Other Voices’ founder, and UCC graduate, returns to his native city and the campus where he began his performing career.

“My own musical expedition began in UCC and was informed in every way by the music that I heard, the people that I met, and the wonderful experience that I had as a student in the University," King said. "It is the realisation of a long-held ambition to bring Other Voices back home to the beautiful campus of the University and to Cork City.”

UCC President Professor John O’Halloran said that the Cork campus in Ireland will echo with music and dance: “The arts have the power to both inspire and bring people together.

"After two years of the pandemic, our community will be brought together, as the most beautiful University campus in Ireland will echo with music and dance.

"We have exciting plans for the future development of arts and culture at UCC and we are proud to welcome home distinguished UCC alumnus Philip King. We thank Bank of Ireland for their support and hope this event is enjoyed by all both at home and across the world.”

Ian McMorrough, Director of Bank of Ireland Area South, said: “We are delighted to support UCC in bringing Other Voices to this fantastic campus. It is great to see the return of cultural events nationwide and Other Voices at UCC promises to be a unique and special evening for those attending at the University or watching around the world. Bank of Ireland would like to wish everybody involved the very best of luck with the event.”

Limited access to the Other Voices: Bringing It All Back Home events in the Aula Maxima, Honan Chapel, and The Glucksman will be facilitated by a ticketed lottery. Full details are available at OtherVoices.ie and by following #OVUCC on social media.

This collaborative live stream is produced in partnership by South Wind Blows, Other Voices, and UCC, and made possible with the generous support of the Department of Media, Tourism, Arts, Culture, Sport and the Gaeltacht and Bank of Ireland.