Jarlath Regan presents his second live-comedy club as COVID-19 has clubs on lockdown. 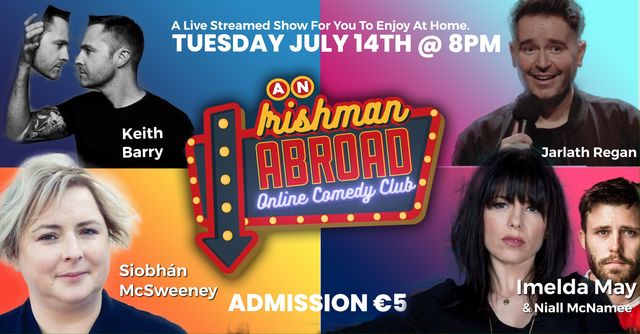 With theaters and comedy clubs still closed Jarlath Regan's Irishman Abroad Online Comedy Club has all your giggling needs covered with the next best thing. The Irishman Abroad Online Comedy Club returns, with a stellar line-up, including Imelda May, Keith Barry, Siobhan McSweeney, and Niall McNamee. The show will be streamed live on Tues, July 14, 2020 at 7:45pm GMT.

Below learn a little more about your host and his special guest for The Irishman Abroad Online Comedy Club:

Jarlath Regan is an Irish comedian, writer, illustrator creator and host of the Irishman Abroad podcast.  Since the age of 24, he has made his living performing standup across the world. In 2013 he moved to London to perform standup. Six months later he created the award-winning Irishman Abroad podcast series, listened to by more than one million people worldwide

Singer, musician and often described as "a unique vocal talent" Imelda May is known for her musical style of rockabilly revival and has also been compared to female jazz musicians such as Billie Holiday. Her latest album, Life Love Flesh Blood, was released in 2017.

As the world’s leading TV hypnotist, mentalist and brain hacker Keith Barry has been blazing a trail across the globe for many years.  His mind-blowing skills have been showcased in over 40 international television shows, including his most recent series, The Keith Barry Experience. He also recently starred in ITV’s smash hit series You’re Back in The Room where he hypnotized the contestants to stop them winning the prize money!

Siobhán McSweeney is best known for her role as Sister Michael in the smash-hit comedy series, Derry Girls.

McSweeney was born in County Cork, Ireland. Before acting, she did a science degree at the University College Cork. In 2001, she moved to London when she secured a place at the Central School of Speech and Drama.

GAA star Niall McNamee plays Gaelic football with his local club Rhode and is a former Offaly senior inter-county player. He has been one of the top forwards in the country from the mid-2000s. He has had little success with Offaly but did play in the 2006 Leinster final in 2006 but lost out to Dublin. He was a member of the Irish team for the 2010 International Rules Series.

Read more: Cranberries announce release date for reissue of No Need to Argue