Saoirse Ronan agreed to team up with the cast of Derry Girls for RTE's Comic Relief, and it went exactly how you'd expect! 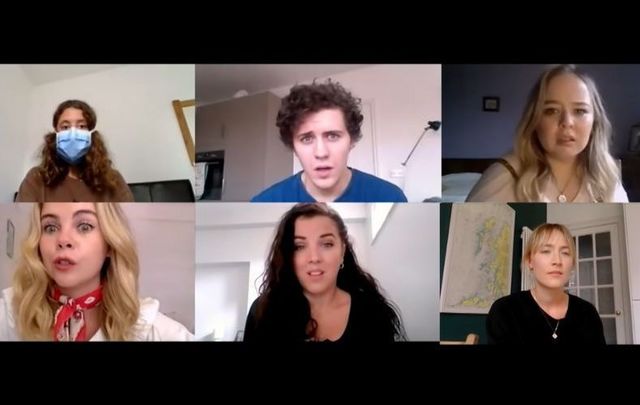 Saoirse Ronan teamed up with the cast of Derry Girls for RTE's Comic Relief. RTÉ, YouTube

Imagine Saoirse Ronan as one of the Derry Girls? It's easy if you try...

Saoirse Ronan joined the cast of Derry Girls in a hilarious sketch for RTE's Comic Relief which aired in Ireland on Friday night.

For the sketch that aired on RTE in Ireland on Friday, the stars of Derry Girls - Saoirse-Monica Jackson, Jamie-Lee O’Donnell, Nicola Coughlan, Dylan Llewellyn, and Louisa Harland - join together on Zoom in anticipation of a meeting with Oscar-nominated Saoirse Ronan.

Naturally, there's great excitement amongst the gang, especially since, according to Saoirse-Monica Jackson, this could be a great opportunity to break away from their Derry Girls characters.

"It’s just everybody thinks we’re exactly like our characters in Derry Girls,” she says, sounding an awful lot like her character Erin on the hit show. “We need to prove that we’re serious, intelligent young women.”

Read More: Derry Girls season 2 is now on US Netflix

Jackson had allegedly pitched a "brilliant idea" to Ronan via email, and turned to her costars for help. In typical Derry Girls fashion, however, their ideas include a new script from Nicola, which turns out to be an episode of The Wire, “hats” from Louisa, “coloring in” from Dylan, and a “contemporary dance piece” from Jamie-Lee with none other than Connell from “Normal People.”

Panic ensues as Ronan dials into the Zoom call.

“Well, listen, I got your emails, Saoirse, your many, many emails. I’m actually not sure how you got my email address," Ronan says.

“Listen, I’m really up for this, this Comic Relief thing, mainly because it’s such a great cause. But also, if I do it, will you stop emailing me?”

Check out how their hilarious sketch concludes here:

Afterward, Nicola Coughlan thanked RTE Comic Relief for letting her and her castmates "act the eejit" with Saoirse Ronan:

Please donate if you can and help so many brilliant Irish charites 💚https://t.co/UzZmoxHay2 pic.twitter.com/nYzAwskmND

Lisa McGee, the creator and writer of Derry Girls, introduced Ronan as "the sixth Derry Girl:"

On Tuesday morning, it was reported that RTE's Comic Relief raised €5.5 million. You can still donate here.