Saoirse Ronan and Jimmy Fallon teamed up for a very festive rendition of The Pogues' classic 'Fairytale of New York.' 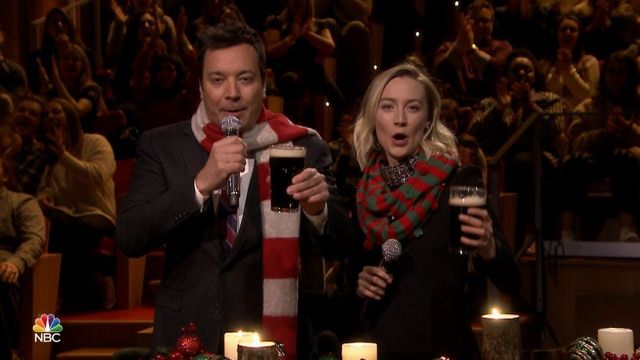 We must admit as soon as we read the words Saoirse Ronan and “The Fairytale of New York” we started to panic having a flashback to the much beguiled “Saturday Night Live” Aer Lingus skit, from earlier this year, that went down like a lead balloon. However, despite Jimmy Fallon’s questionable accent, they pulled off a pretty great version of The Pogues Christmas classic “The Fairytale of New York.”

Ronan was on “The Tonight Show” ahead of the release of her latest movie “Mary Queen of Scots”, out on Friday, December 7. Fallon, who has strong Irish roots and the New York native, Ronan, who grew up in County Carlow, celebrated their Irish heritage in the surroundings of a mock Irish pub.

We must say the show’s band, The Roots, did a great job covering the Shane MacGowan, Kirsty MacColl Christmas classic.