TUNE IN: AOH presents “Lincoln and the Irish” live discussion with Niall O’Dowd

The Ancient Order of Hibernians (AOH) presents "Lincoln and the Irish" virtually on March 27 - find out how to register here.

In Partnership With:
Ancient Order of Hibernians 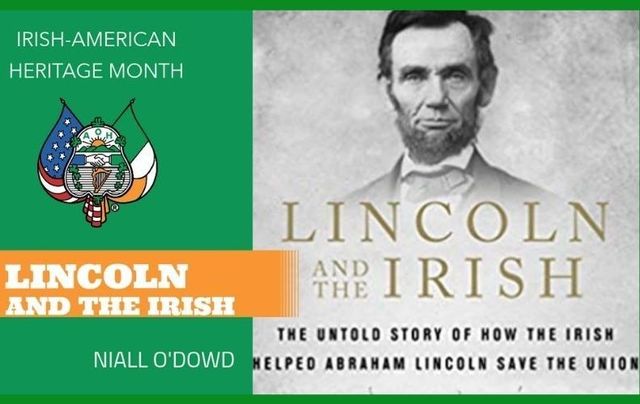 Tune into "Lincoln and the Irish" on March 27 at 1 pm EST. Ancient Order of Hibernians

The AOH's "Lincoln and the Irish" will stream live on Saturday, March 27 from 1 pm EST.

Register for the AOH's "Lincoln and the Irish" webinar here.

The Ancient Order of Hibernians (AOH), the largest and oldest Irish Catholic organization in the US, is set to present a live discussion with Niall O’Dowd, founder of IrishCentral, entitled “Lincoln and the Irish” on March 27.

During the event, O’Dowd, who is also the founder of Irish America Magazine and the Irish Voice newspaper, will reveal the story of Abraham Lincoln, the 16th president of the United States, and his fascinating relationship with the Irish throughout the US Civil War.

In 2018, O'Dowd published “Lincoln and the Irish: The Untold Story of How the Irish Helped Abraham Lincoln Save the Union."

Ahead of the live event, O’Dowd says his book “reveals what was never properly documented, just how important a role the Irish played not just in the Civil War but also in Lincoln's domestic life.”

The live event, which is free to attend, requires prior registration here. It will be hosted via Zoom on Saturday, March 27 from 1 pm - 2:30 pm EST.

“Lincoln and the Irish” is part of the AOH’s series of events presented as part of Irish American Heritage Month in the US. All of the this month's presentations are available to watch on the AOH's YouTube page.

On March 6, the AOH hosted “Irish America and the 1916 Rising” with guest speaker Dr. Ruan O’Donnell, who is a senior lecturer at the University of Limerick. Dr. O’Donnell has published several books and was the editor of the “16 Lives” series of biographies detailing the lives of the leaders of the 1916 Rising who were executed. Dr. O’Donnell himself writing the biography of Patrick Pearse.

Leo Finnegan and Jim Fahy (RTE correspondent for the west of Ireland) presented “Michael McGovern, the Puddler Poet, IRB man, AOH Member” on March 13. Michael McGovern, Irish nationalist, American patriot, labor poet was, in his day, one of the most powerful voices of working men and women in the U.S., a man who could galvanize union rallies with song-poems like those written in support of beleaguered strikers at the Homestead Steel Mills in Pennsylvania in 1892.

“The Irish in the American Civil War” was presented on March 20 and was hosted by historian and archaeologist Damian Shiels, who has lectured and published widely on both social military history and conflict archaeology. He previously spent time as a curator at the National Museum of Ireland, where he was part of the team that designed and prepared the award-winning Soldiers and Chiefs military history exhibition. He established and runs IrishAmericanCivilWar.com.

On March 21, the AOH hosted "Moore Street: Birthplace of the Republic," which focused on the ongoing campaign to to protect the historic Moore Street area of Dublin and to see the entire terrace and surrounding laneways designated a National Monument.

To watch back on the AOH's Irish American Heritage Month presentations, head over to their YouTube page. You can learn more about the Ancient Order of Hibernians on its website.

Tune into "Lincoln and the Irish," a live AOH event featuring Niall O'Dowd, on March 27 from 1 pm EST.