A chance remark would steer me in the direction of a wistful storyteller looking back on Ireland. 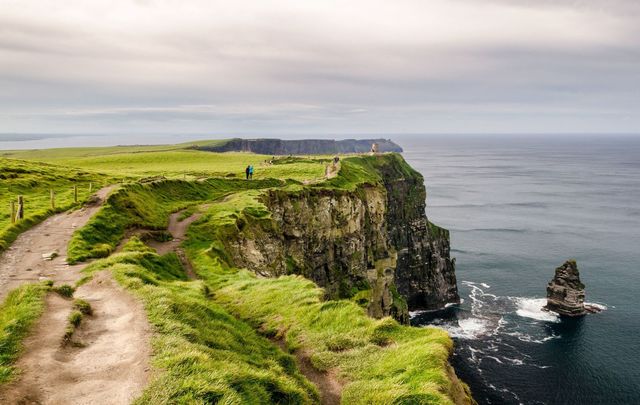 During the writing, the people I had met in Chicago were in a sense the audience I was writing to. Getty

A chance remark would steer me in the direction of a wistful storyteller looking back on Ireland.

Way back in 1999 my stage play comedy Frugal Comforts was produced by the Innisfree Irish Community Theatre company from Boca Raton in Florida. Their production was taken to Chicago to participate in the Acting Irish Theatre Festival and I was invited to attend. I received funding from Galway City Council and made the trip to Chicago for the Festival, sitting in an air-conditioned theatre, a heatwave outside, and viewing my play set in a wintry Irish bedsit.

It was a surreal experience. The production won Best Production during the festival and went on to be produced several more times by other Irish community theatre groups in the US and Canada over the next few years.

During that visit, a chance remark by me about getting the train to Galway on my return had the effect of causing one of the Irish people to gaze wistfully into the distance at the thought, and she said that it sounded so romantic to get the train to Galway and how a part of her longed to get that train.

A few years later I began writing stories from the perspective of someone looking back on Ireland in that frame of mind. These stories would eventually become the novel “When Things Were Great” which was released on March 17, 2019.

Read more: P.S. I Love You sequel is on its way! Are you ready?

The writing of the novel began in the style of a mock seanachaí (storyteller) talking about modern Ireland. This was initially done as a bit of fun, building up routine mundane things, like driving into town, but in an epic Irish storyteller manner. This approach gave way over time to a more omniscient narrator approach as I built up the fictional town and county of Notton Doon, in the Barren County, which became symbols for the experience of so many Irish people in small-town Ireland, of being in a place where, quite literally, there is little or nothing doing.

To keep the connection of a protagonist experiencing distance from Ireland, I named the main protagonist Oisín, who, like his legendary namesake returning to Ireland from Tír na nÓg after 20 years, is returning from America after 20 years, to find the country totally changed, in the throes of an uncharacteristic economic boom.

Gradually, as the novel took shape it began to acquire a verisimilitude that in a sense became its own form of romantic Ireland. During the writing, the people I had met in Chicago were in a sense the audience I was writing to. This often happens with a piece of writing. For instance, you might find yourself writing a story with an old school teacher in your mind’s eye throughout, as the ideal recipient of the piece. In this case, it was the audiences from the Acting Irish Theatre Festival that were in my mind’s eye.

Read more: Life of High King Brian Boru to be major US miniseries

If someone in Canada or the US could become wistful at the thought of a train ride from Dublin to Galway, what might they make of the characters and inhabitants of my fictional town of Notton Doon? It occurred to me that the admittedly slightly jaundiced view of Ireland that the novel portrays might, in a sense, serve two needs simultaneously: satisfying nostalgic yearnings, while at the same time confirming the rightness of decision to have emigrated from the dank old sod in the first place.

“When Things Were Great!” is now available for purchase from Apple, Amazon and Barnes & Noble: https://bit.ly/2T42Ojc

Eamonn Kelly is an award-winning Irish playwright and short story writer. His stage comedies have engaged with social and political dilemmas peculiar to Ireland, from the brutalizing educational methods of the Christian Brothers in “Religious Knowledge/Parental Guidance”, to Ireland's seemingly unsolvable unemployment/emigration conundrum in “Frugal Comforts”. “When Things Were Great!” is his first novel.