Would the real life Christopher Robin have scoff at Domhnall Gleeson movie plot?

Review: "Goodbye Christopher Robin lets you see the pain but lets you dodge it... everyone lives happily ever after." 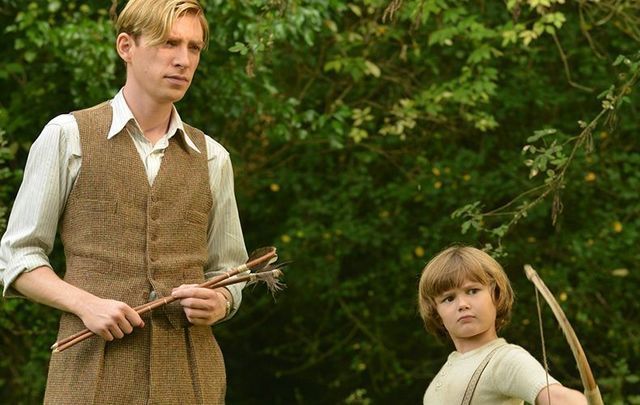 Review: "Goodbye Christopher Robin lets you see the pain but lets you dodge it... everyone lives happily ever after."

English reticence, if it goes on too long, can become unintentionally funny. We know all about the importance that they attach to a stiff upper lip in a crisis, but after the crisis has ended can't they let their hair down even for a minute?

Goodbye Christopher Robin, the well-meaning if plodding new film about the famous books that transformed the life and fortunes of writer A.A. Milne and his unwitting son Christopher Robin, unfolds at times like a treatise on which is worse, stoicism or sentimentality?

The film reminds us that the beloved children's author Milne (played by Domhnall Gleeson) was in a very dark place before he wrote the first Winnie the Pooh classic. Freshly returned from the killing fields of France, where he had been forced to witness unspeakable slaughter in the First World War, he is understandably tormented now by undiagnosed post traumatic stress.

Goodbye Christopher Robin reenacts the prevailing attitudes of the period by reminding us just how unwelcome any reminder of the pointless conflagration the world had just passed through was in polite society. If you hadn't been there, you didn't particularly want to hear about it, the film shows us.

Gleeson, 34, does a particularly good job of capturing the buttoned up Britisher that he's cast as without succumbing to the danger of making his character into a stuffed shirt.  It's a nimble bit of footwork from the Irish star because the script and the director seem to point him toward scene after scene where his interior life is stifled by circumstances, temperament, class and inhibition.

That Gleeson never lets us lose sight of the man underneath the rigid mask of class and social position is a testament to his skill as a screen actor. Other actors don't fare quite so well.  Margot Robbie seems to have emerged from an early Noel Coward play and clearly places more value on appearances than even her banked down husband.

But it's poor Billy Moon, the family's nickname for their neglected son Christopher Robin, who really suffers in this stilted and emotionally parched household.

Set mostly in the 1920s, the film shows us how Christopher Robin's childhood games and imaginary friends inspire his writer father to create the beloved bear character that will transform all their lives.

Gleeson's character has obviously lost his faith in life and most of humanity, but for his son Billy Moon, played by Will Tilston, the world is still a thrilling adventure. The sharp contrast between their outlooks is what eventually inspires Gleeson's attentive father to look through a child's eyes again, inspiring the books that follow.

The global popularity of Winnie the Pooh takes them all by surprise, however. Milne and his photogenic wife become international celebrities and Christopher is suddenly no longer just a boy, but a boy in one of the world's most beloved books.

If that sounds like a recipe for disaster you don't have to wait long. Soon every aspect of their private lives is being scrutinized, monetized and photographed. The innocence that inspired the books in the first place is soon subsumed by the world's grubby mitts, with predictably ruinous results.

The real A.A. Milne and Billy Moon aka Christopher Robin.

In the film a great and inevitable severance occurs between the parents and the son, who is enraged to see his childhood stolen by a fictional character that he comes to despise. In real life they never reconciled; in the film version, however, the warring factions are reunited in a moment that feels just a little too good to be true – feelings that have been this hard rarely resolve themselves, after all.

After a cut-short childhood where he was pursued and prodded by thoughtless fans and greedy book sellers, Billy Moon is sent off to boarding school where his celebrity status is treated like a badge of shame, not honor.

The school hearties like to trip and push him down the stairs each day whilst his absent parents like to travel around the world on their new found riches. There isn't a kindly face to take his part or stand by his side. By the time the Second World War comes around no wonder he simply wants to race off to it and become someone, anyone, else.

But the truth is Goodbye Christopher Robin lets everyone off the hook in the end, which is why it's such an obvious work of fiction.  We understand that the boy in the book may have had a rougher go of it in real life than the classic stories let on, but we also know that if we think about the implications of that for too long some of the shine will come off the story for anyone who reads it.