If you want to get a taste of what Fleadh Cheoil na hÉireann 2022 is all about, tune into IrishCentral to watch some of the Irish music competitions live! 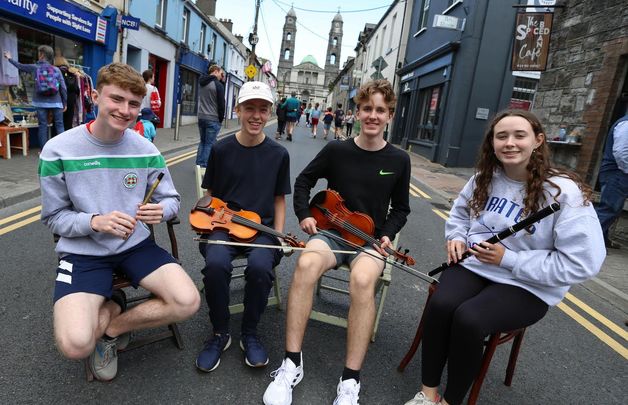 Fleadh Cheoil na hÉireann 2022 is underway in Mullingar, Co Westmeath, turning the town into the epicenter of traditional Irish music and dance from July 31 through August 7.

Comhaltas Ceoltóirí Éireann, the organization that runs the annual All-Ireland Fleadh Cheoil, announced this week that for this first time ever, some of the Irish music competitions will be live streamed on Facebook.

IrishCentral is delighted to be teaming up with the team at Fleadh Cheoil this year to bring you some of these live streams, including the uilleann pipes competition live this Friday, August 5 at 8:15 am EST.

Fleadh Cheoil 2022 na hÉireann is welcoming you to watch LIVE the first solo competition of this year's festival – Uilleann Pipes! Join us for to witness the incredible talents in this competition live now.

Elsewhere, Ireland's Irish language TV channel TG4 will be "Fleadh Cheoil Central" from August 5-7, broadcasting three live shows full of the very best of Irish song, music, and dance, directly from the Fleadh Cheoil na hÉireann 2022. Fleadh 2022 will be available to watch worldwide online on the TG4 Player on TG4.ie or on the TG4 Player app available to download on iOS and Google Playstore.

Some of the IrishCentral team has been on the ground in Mullingar this week taking in the scenes - and the craic! - of the All-Ireland Fleadh Cheoil 2022:

People of all ages are getting into the music at this year's Fleadh in Mullingar, Co. Westmeath! 🎶🎻🎶🎻

Posted by IrishCentral.com on Thursday, August 4, 2022

What is the Fleadh Cheoil?

The All-Ireland Fleadh Cheoil (often known simply as 'The Fleadh) is hosted annually by Comhaltas Ceoltóirí Éireann, the largest group involved in the preservation and promotion of Irish traditional music.

Literally meaning "festival" or "feast" of music, the Fleadh Cheoil encompasses a range of entertainment activities including concerts, céili/set dancing, traditional sessions, as well as competitions in music, song, language, and dance at the local (county / region), provincial, and All-Ireland levels.

Up to 12,000 performers participate at the All-Ireland Fleadh, with an estimated attendance of over 250,000 people. While competition is an important element of the Fleadh, the event is a multi-faceted shop window for Irish culture.

Competitors at the All-Ireland Fleadh are of any age and come from around the world to compete. Competitions are in four age categories (Under 12, 12-15, 15-18 and Senior) and include most traditional Irish instruments (fiddle, flute, uilleann pipes, banjo, accordion, etc.) There are competitions for singing, both in English and in Irish, and also for ensembles (pipe and ceílí bands, duets, and trios.)

Competitors from regions with qualifying rounds must first qualify at the regional level before competing in the championship round. In Ireland, for example, musicians must be among the prizewinners in their County and then Provincial Fleadh before heading to the final round at the All-Ireland.

These young musicians were busy showcasing their fantastic musical skills to passers-by at the Fleadh in Mullingar, Co. Westmeath! 🎶🎻🎶🎻

Posted by IrishCentral.com on Thursday, August 4, 2022