Irish uilleann piping is now recognized as a part of Intangible Cultural Heritage of Humanity by UNESCO. 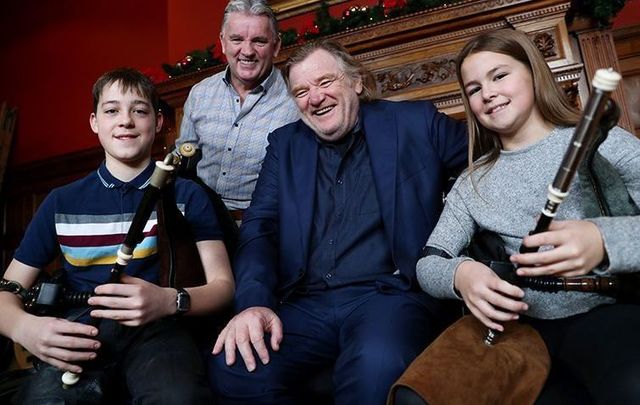 What do John Lennon, "Braveheart," and UNESCO all have in common? Surprisingly, the famed Irish instrument the uilleann pipes.

The traditional Irish instrument, the uilleann pipes, has received the same kind of UNESCO recognition as tourist sites such as the Rock of Cashel and the Cliffs of Moher. The uilleann pipes have been recognized as a part of the "Intangible Cultural Heritage of Humanity."

Placing it alongside the Argentinian Tango, the Armenian Duduk and its music, and the Baul songs of Bangladesh, uilleann piping and its distinctive role in culture has received global recognition, placing “the Sound of Ireland” among the other recognized cultural practices that are considered enriching to all humanity.

The UNESCO announcement was made on Thursday, December 7, after the Irish government nominated the musical style to the list. Gathered with Na Píobairí Uilleann – the body dedicated to access, education, performance and preservation of uilleann piping and pipemaking – Irish actor Brendan Gleeson celebrated the announcement and the recognition finally awarded the Irish tradition.

“It’s very fundamental to the way I think about this country,” Gleeson said of uilleann piping, “and I don’t think they’re quite given the respect, as an artwork, the respect it deserves.

“To have international recognition like this is massive and I think we’re very good when other people recognize something good in us, to quietly recognize it ourselves so I’m hoping that’s what's gonna happen because they’re a gift to the world.”

Older than Guinness, uilleann piping descends from an instrument known as the Irish pipes in the 1740s. While the practice declined in the 19th century, it came back with a bang in the 20th century and has even featured in the movies such as "Braveheart" and "Titanic."

Bruce Springsteen, Mark Knopfler, and Kate Bush and others have used the uilleann pipes in their recordings. Jimmy Cagney and John Lennon owned sets of uilleann pipes.

Today it’s a thriving art form in both Ireland and worldwide, practiced in in 50 countries on six continents in places as diverse as Cuba, Finland, Australia, Argentina and Germany. There are more than three thousand uilleann pipers throughout the world, playing Irish music on this Irish instrument in dedicated clubs throughout Europe and in North and South America, Australia, New Zealand and Japan.

“Today is a global milestone for uilleann piping and shines a world-wide spotlight on The Irish Pipes,” said Gay McKeon CEO of Na Píobairí Uilleann and himself a celebrated player.

“From movies to TV and now video games, there are new opportunities opening up all the time that showcase the versatility of the instrument and its distinctive sound.

“We thank supporters for their enthusiasm and would encourage people to discover the pleasure of playing and attending performances at home and abroad.

“Finally, we would like to thank the many groups and individual practitioners in the world of uilleann piping who support us – it’s an inspiring world-wide, community devoted to this wonderful music.”

While Government Chief Whip and Minister of State for the Irish Language, the Gaeltacht and the Islands, Joe McHugh TD was present at the announcement, Josepha Madigan TD, Minister for Culture, Heritage and the Gaeltacht, also commended the decision.

“Today’s decision is testament to the community of uilleann pipers across the country who, since the 1960’s, have succeeded in their mission to stop the decline in the playing and making of the uilleann pipes,” said Minister Madigan.

“The success today is a real community effort from Na Píobairí Uilleann, Scoil Samhraidh Willie Clancy, the Armagh Pipers Club, and other organizations and individuals who have contributed to the resurgence of interest in uilleann piping, in Ireland and around the world.”

In celebration of the announcement, Na Píobairí Uilleann has announced free access to its online learning and performance portal in addition to a fascinating archive celebrating a rich cultural history at http://pipers.ie/source/.

Interested in learning an Irish traditional instrument, IrishCentral has created a series to set you on the right path. You can find the first article on picking the perfect instrument here.