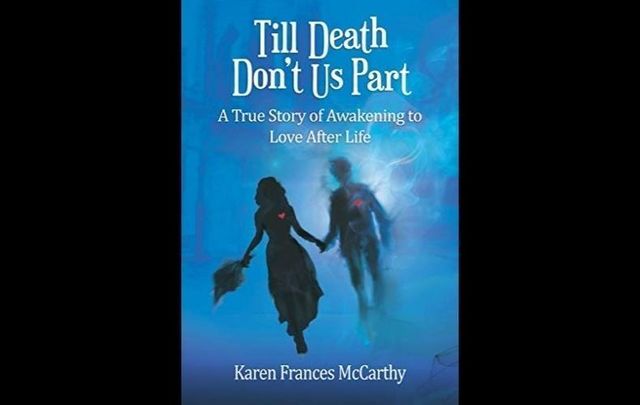 Former Irish political journalist and war correspondent Karen Frances McCarthy, whose work includes The Other Irish (2011), which was a cultural outreach in the Northern Ireland cross-border peace effort, turns her critical and scrutinizing eye on her own life in her second book, "Till Death Don’t Us Part: A True Story of Awakening to Love After Life."

An honest, thought-provoking, and beautifully written memoir, it tells the true and transformational story her extraordinary journey from skepticism, through tragedy, to awaken to the knowledge that her dead fiancé is communicating from the hereafter.

McCarthy reports on her extraordinary experience to come to terms with a series of supernatural events that begin to occur after the death of her fiancé Johann, who had died suddenly in New York, while she was away on assignment.

The story begins one hot summer in rural Virginia, where McCarthy decides to avoid a painful return to New York and agrees to caretake a temporarily vacant house.

In the solitude of the house, inhabited otherwise only by the resident cat, Busker, allusive hints of an invisible presence begin to appear—sensations of feathery caress, gently tugged hair, resonant scents. Flashbacks to their life together and to her early years in Dublin, alternate with the unfolding story, to provide context for these unusual events.

Over time, aided by a host of obliging helpers—a kindly Catholic priest, a university professor,  a Spiritualist minister, Reiki healers, instructive mediums, among many others—McCarthy struggles to accept that consciousness survives death but eventually learns to read Johann’s ongoing presence in her life.  Love is indeed as strong as death, as the Bible opines.

What holds the reader to this tale is its teller’s own skepticism over the whole proceeding. McCarthy is the least gullible reader of her own story. Neuroscience, physics, and philosophy frame the believability. These hard-nosed disciplines concede that the relation between physical and mental energy is still in many ways mysterious. In exploring these ideas, the story doesn't just save us from our fear of death but also from the vague uneasiness and sense of disconnection that sometimes infect a life.

McCarthy shows, by the book’s startling end, what a glorious mystery is life truly.