Over 1,000 gather in Ireland to connect with ancient spirituality and druidic traditions

Feeling let down by the modern world and traditional religion, people are flocking to events like The Spirit of Folk at Dunderry Park this weekend in Ireland to connect with ancient spirituality. 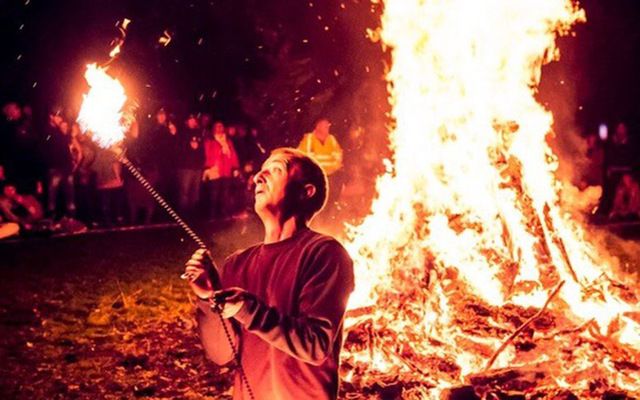 Fire ritual at the Spirit of Folk. Michael Nolan

It takes a good hour of winding along small country roads before the 200-year old restored Georgian house peeks over the thick hedgerows in this, the Boyne Valley, the ancient heartland of spiritual Ireland. The iron gates at the entrance to the 25-acre estate at Dunderry Park stand open, draped in wet weeds and leaves from the storm the night before.

The dampness hanging in the morning air is disturbed only by the sound of a soft breeze and the gravel pathway crunching underfoot. A small flock of blue tits flit on leafy branches, dotted like notes on a stave, their yellow bellies bright in the late morning sun. In the lake, a curious otter pops his head up above water to investigate the new arrival, while a long-eared Irish hare hops back into the forest. A pilgrim on this path is nothing new to them – for twenty years, the woodland creatures have seen thousands walk this way in search of meaning and healing.

Martin Duffy creeks open the front door. He is the director of the Dunderry Park retreat center, teacher of Irish shamanistic studies and warden of these woodlands and lakes that echo of ancient times.

An army of volunteers is bustling about preparing for the big gathering next week to commemorate the center's twentieth anniversary. From all across Ireland, Europe and even the U.S., people are packing their tents and preparing for a weekend of high-energy, foot-tapping traditional music, firewalking, storytelling and the largest drumming circle every to assemble in Ireland. It is a rare opportunity to mingle with artists, artisans and Jungian dream analysts, to reengage with nature and heal the spirit within. They're calling it the most magical event of the year.

At least 1,000 are expected at Spirit of Folk this weekend. Photo: Michael Nolan

Amid the bustle, we find our way into a quiet room and settle into oversized armchairs.

A crow taps rhythmically on the window. Apparently, he's been doing this all morning.

"Maybe he's trying to give us a message," Duffy smiles. Duffy is clearly at home in this environment. Surrounded by Celtic art and the traditional drums and rattles of the shaman, he possesses an ease that has grown out of his reverence for the spirit and for the land. He also seems like a man out of time. But times are changing.

Thirty years ago, my local Catholic church was standing room only for seven Masses a day on Sundays. These days, you'd be hard pressed to find someone under sixty sitting the almost empty pews. Many Irish people are hung over from successive Catholic Church scandals and are leaving their religious and spiritual life behind. Economically, Ireland has become a modern nation filled with foreign investment that has helped fostered cultural diversity launched it wholeheartedly onto the world's economic stage. Most everyone is better off these days in Ireland, at least materially.

"Now everything is so quickly available to us," Duffy explained, "and as the psyche or soul is more and more neglected it starts showing symptoms like depression and anxiety and lack of meaning in life. The use of antidepressants and anxiety drugs is increasing, but people have never been so miserable."

It's a plight Ireland shares with much of the Western world, where the rise of materialism and the decline of spiritual practices are blamed for an emerging spiritual vacuum. Increasingly, studies are recommending time in nature as an antidote.

This is not news to Duffy who is descended from a long line of healers. His grandfather was a traditional folk healer who treated incurable patients sent to him by the local physician. The old man healed open sores within days, sores that would take months to heal conventionally. Duffy, however, opted for mainstream medicine and psychotherapy, where he saw many different treatments and medications used to treat mental health issues. He also noticed that many people were being diagnosed with psychiatric breakdowns when he says they were really experiencing spiritual emergencies.

The answer came when he did breath work with an old druidic figure and had what he calls an "amazing awakening." This fueled a passion to journey more into the world of the shamanic with indigenous tribes in Mexico and South America. There he realized the need to create a healing space that was more transpersonal – focused on healing the spirit, one that blended the shamanic experience with psychology.

"We opened this center as a counter point to the medical system … a kind of a transpersonal or spiritual center to validate people's experiences as just being part of a transformation or spiritual awakening."

Dunderry Park is the perfect location for this kind of spiritual healing. The Boyne Valley brims with sacred sites. It is the repository of 5000-year-old miracles of engineering, great passage tombs and cairns that were built long before the pyramids and Stonehenge. The inner chamber in the huge mound at Newgrange, for instance, is dark all year except for dawn on the winter solstice, when it aligns with the rising sun and is flooded with light. Each year, it promises rebirth on the shortest, darkest day of winter. Each cairn in the Valley is carved with beautiful suns and spirals, testifying to the ancestors' reverence for beauty and the cycles of life.

Since the first healing retreat held at Dunderry Park twenty years ago, urban dwellers have been steadily arriving with the unhappy sense that while they had all the trappings of success on the surface, they were missing something inside.

"We invited them to step out of their ordinary everyday lives and … away from their phones and computers and come back into nature and celebrate in a way that is about touching their own inner nature," Duffy explains. "We find that many people are separated from that, they don't have a deep connection to their own nature, to human nature and to the natural world itself, so we take them out to the sacred sites and do druid rituals to celebrate the earth and the spirit world in a very direct way."

Central to shamanic healing is the practice of honoring the ancestors. From a psychological point of view, Duffy finds that people are dealing with personal issues that date from childhood and further back along the ancestral line. Part of the healing involves journeying back to heal ancestral wounds, and part involves recognizing that each of us stands on the shoulders of our ancestors and each of us embodies their strength, which is something that we can access in our daily lives.

The Irish air acts quickly, as they say, and visitors from across Europe and the U.S. are reaping the benefits of the natural spirituality combined with transpersonal therapies found here – the reemergence of earth-centered consciousness that allows people direct contact with God or the spirits of the ancestors and frees them of sanctioned rules and rituals.

"Within a day or two of people being here, people say, 'Oh this feels like coming home.'" Duffy says. "But what's really happening is they're coming home to their own soul."

Duffy could talk for hours on the subject of noble awareness and global consciousness, but he insists that to really understand it, you need to get out into nature to connect with you power place. So, following his advice, I take a drum and venture to the cairn.

The small door of the cairn is barely visible beneath the round grassy mound. I crouch down and creep through the short passageway inside where the large dome is visible by the light of a dozen tea lights. I sit and slowly beat the drum. Each beat reverberates around the chamber until it's flooded with vibrations that quiet my monkey mind. An impalpable presence gently approaches. It is comforting, accepting and strangely familiar - the ancestors no doubt. As the throb of the drumbeat melts away my physical awareness, I am encircled by the warmth and acceptance of the spirits of the ancestors until I sense a freedom and oneness I have never known, a feeling of being truly home. I begin to understand what Duffy means about opening to the experience. Journeying is an experiential, visceral practice that speaks to our true nature, our oneness with all things, whispering forward and backward through time that we are part of something far greater than ourselves.

The Spirit of Folk Anniversary Gathering is happening on Sept 9-10 at Dunderry Park, Co. Meath, Ireland. Tickets are available at http://spiritoffolk.com/tickets-dunderry-park-the-gathering-2017