Sean Spicer reveals all on Donald Trump’s missing green tie, his holy medals and dealing with the president

White House Press Secretary’s new book “The Briefing: Politics, The Press, and The President” reveals insights into Donald Trump and how the Irish American coped during his tenure. 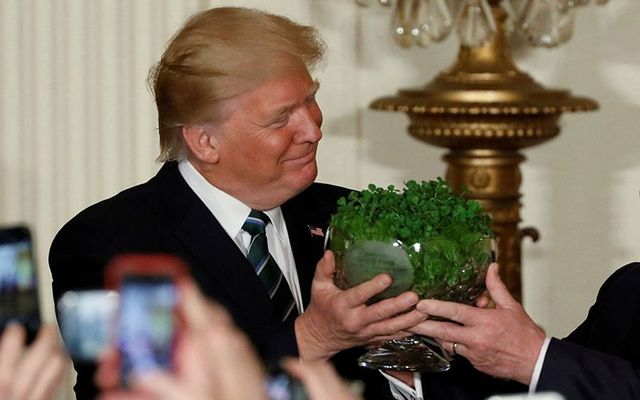 President Donald Trump being presented with a bowl of shamrocks on St. Patrick's Day. RollingNews

White House Press Secretary’s new book “The Briefing: Politics, The Press, and The President” reveals insights into Donald Trump and how the Irish American coped during his tenure.

Sean Spicer has revealed in his new  book, "The Briefing: Politics, The Press, and The President" (Regnery), out July 24 exclusive insights into the president he served and how he coped with the pressure.

He also reveals a back and forth with President Trump over whether he had a green tie for the St. Patrick’s festivities.

Spicer, calling Trump in the residence the evening before St. Patrick's Day, 2017:

Spicer: "Sir, just a reminder about the St. Patrick's Day event tomorrow — do you have a green tie?"

Spicer: "I've got an extra green tie. Would you like me to bring it in?"

Trump: "Thanks, sure, but let me see what I can do. It'd be great to have a backup in case I can't find one. Let's touch base in the morning."

"First thing that day, I delivered the green tie to the Oval Office and set it on the Resolute desk… The billionaire president wore my green tie that entire day ... He must have liked it because I've never seen that tie again."

Spicer, who loves to make clear his own Irish heritage also says how his Irish Catholic upbringing sustained him at times of deep stress.

"Before I walked out, I would try and have a moment of reflection and read a daily passage from the book Jesus Calling."

"Behind my desk was a wooden table with two drawers. On top of the table sat a box with a picture of St. Gabriel on if that [my wife] Rebecca had given me as a gift when I took the job. In the box, I had two medals that I would slip into my pocket: one of St. Michael in honor of my dad and another of Mother Teresa ... given to me early in my tenure by John Gizzi of Newsmax."

As to how he handled the most volatile of presidents of all time Spicer says he realized the president wanted his statements used directly as he said them.

"[B]etween 10:00 a.m. and noon, Sarah Huckabee Sanders and I would poke our heads into the Oval Office ... [Trump] was always full of questions, wanting background on where a story came from and, of course, curious to know what we were going to say about it. And he was never shy about giving us directions."

"I'd be peppered throughout the day with calls from the president as stories evolved. He was extremely engaged, very particular, and insistent about how he wanted his points delivered."

"The more time I spent with him, the more I came to understand that President Trump wanted me to repeat his answers to the press verbatim."

Here Sean Spicer speaks with Megyn Kelly about his time at the White House and his new book: