A beautiful tribute to Séamus Begley was etched into the sand in Salthill, Co Galway as part of an international tribute to the Kerry musician who died on January 9. 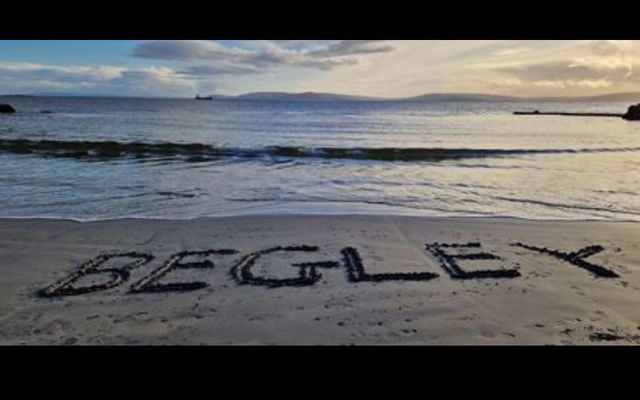 The word "Begley" carved into sand in Salthill, Galway as part of an international tribute to the late trad musician, Séamus Begley.

People across Ireland and around the globe are paying tribute to late trad musician Séamus Begley by imprinting his surname in sand and snow.

It began with a simple but poignant etching of "Begley" in the beach sand in Salthill, Co Galway to honor the Kerryman, who died at the age of 73 on January 9.

Similar etchings have since appeared on sand and in snow across the globe, according to a press release, revealing the trad musician's impact both at home and abroad.

"With one word etched in sand, Begley, the simple carving in Salthill, Galway is one of many that appeared across the country and around the world this week to pay tribute to the late trad musician, Séamus Begley. From sea to shore, in sand and snow, people are paying their respects to the Kerryman, who shared his passion for traditional music and song at home and abroad," reads the statement.

"Known affectionately as Begley, the term of endearment has been inscribed on beaches in Marbella, in snow in Boston and Canada, to coincide with the poignant tribute in Salthill. Every day, new etchings are emerging in recognition of his impact on the local and international stage.

"Renowned for his quick wit and melodic charm, the accomplished accordionist, singer, and bard was synonymous with the Irish folk scene, leaving behind a legacy of work for future generations.

"With a vocal talent that displayed not only his humor and charisma, but also tenderness and emotional vulnerability, he worked with top Irish and international musicians over the course of a career that spanned decades.

"Starting out at the age of 14 at the local dances in Dingle, Co Kerry, he later went on to record his first album, An Ciarraíoch Mallaithe, in 1972. Since then, his calm, laid-back style has enchanted audiences worldwide.

"From his enigmatic box playing to his vast repertoire of songs, the powerhouse of folk, sean nós and storytelling is being honored from Dingle to Donegal and around the globe with one final goodbye – his surname Begley imprinted in sand and snow."