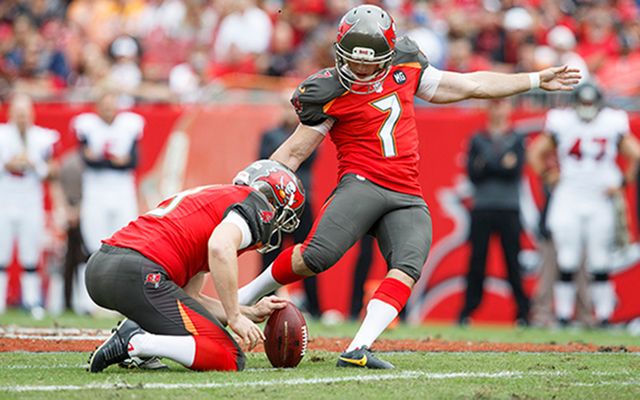 Tampa Bay has signed kicker Patrick Murray, who also held that job for the Buccaneers in 2014 when he made 20 of 24 field goal tries Tampa Bay Buccaneers

NFL side the Tampa Bay Buccaneers have announced they’ll have a certain Gaelic games influence this year with the help of newly-appointed kicker Pat Murray. The son of a Co. Monaghan footballer, first-generation Irish-American Murray started off his own sporting career playing with Rockland GAA in New York before his kicking talent was spotted and developed by Don Bosco High School in New Jersey.

This is the second time Murray has been appointed kicker for the Buccaneers, acting as the team’s placekicker in 2014 and when he hit 20 of 24 field goals with a long of 55 yards. In the same year, he attempted six field goals of 50 yards or more and converted five of them.

New Bucs kicker Pat Murray, proudly sporting a @FORDHAMFOOTBALL hat, says his long journey back to Tampa Bay was meant to be. pic.twitter.com/LhDkNtYdLx

Before he ever kicked a field goal for the NFL, however, the New Jersey native traveled to Rockland GAA based in New York to play underage GAA. Murray has a strong history of Gaelic football in his family with his father and uncles, Ciarán and Brendan, all lining out for Co, Monaghan. In fact, the 26-year-old’s uncle Ciarán captained the Monaghan side to an Ulster title in 1988 with Brendan also on the team.

Pat Murray has an Irish father and an American mother

With an Irish father and a mother from New Jersey, however, Murray was sure to bring the best of the Irish and American sports together and was spotted at a young age for his great kicking skills.

“I remember one game I was taking a sideline ball and I think we had Jimmy O’Flynn in the forwards that game. He just took off and started running straight to goal so I just hit it with the outside of my foot and it curled right into his hands,” Murray told IrishCentral’s sister publication the Irish Voice last year, when it was announced in July 2016 that he had signed for the Cleveland Browns.

“Jimmy took it and put it into the back of the net. It had to be a 50-60-yard kick. That was one of the coolest memories I had playing the game.”

While he grew up a die-hard fan of his father’s home county of Monaghan, Murray began to concentrate more on his American football career at high school level, attending Don Brunco in New Jersey and winning three state titles with them.

He went on to study finance at Fordham University in the Bronx, where he became a two-time All-American punter and All-American kicker. In his senior year, Murray was the number one kicker in all of the NCAA.

Graduating in 2013, he initially spent two years with the Bucs but unfortunately, Murray sat out the 2015 season with an injury, returning last year to the Cleveland Browns where he appeared in just two games. It was announced that Murray had signed on with the Bucs last Monday, taking over the kicking duties from Nick Folk.

Now lining out for the Bucs, Murray still loves his Rockland GAA roots

Murray has always cited the Gaelic Games for giving him his great foot, thanking the Rockland GAA for the opportunities they gave him.

“Marty Hanley and Francie Gargen helped me out when I first started playing with Gaelic with Rockland. They took me in and put me into positions where I was given a lot of responsibility,” Murray told the Irish Voice.

“They gave me a lot of opportunities to kick the ball distances. It helped with my leg strength and I probably wouldn’t be doing what I do if they didn’t give me those opportunities.”

In his senior year, Murray was the number one kicker in all of the NCAA. Image: iStock.

And while he may now have switched Gaelic Park for the NFL stadium, The Farney Army is still high on his list of priorities.

“I grew up watching my Dad, Uncles Ciaran Murray and Brendan Murray, and cousin, Aedin Murray, who were all national caliber Gaelic football players in Ireland. I try to watch as much Gaelic football as I can, it is my first love,” he told NFL Draft Zone back in 2013.

“I bleed green, white, and orange. Gaelic football players don’t get paid to play, you play to represent your county that is more important than earning money.”

“I guess you could say I have a Gaelic style of kicking an American football. I will take the same amount of steps and make the same type of run-up kicking a field goal as I would if I was taking a free off the ground in Gaelic Park,” he previously said the Irish Voice.

“Playing at the Rockland field or in Gaelic Park definitely helped me to make tackles where need be and more importantly to not shy away from the physical side of it."

Who is your favorite NFL player with links to Ireland? Let us know about them in the comments section below.