@Once_Upon_A_Feis features Irish dance pictures from different eras all around the world. 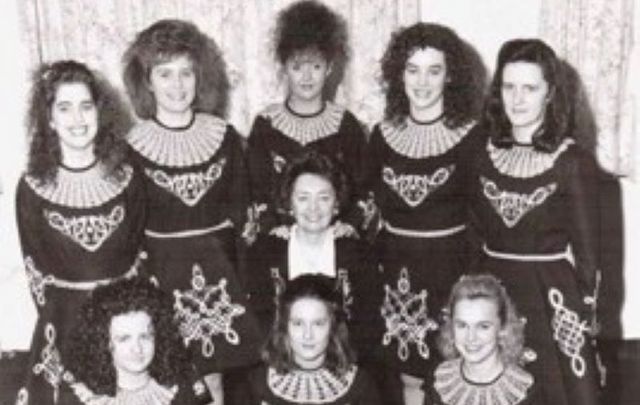 Anyone remotely familiar with Irish dancing is aware of the dramatic changes it has endured in a very short amount of time.

I myself am a “semi” retired Irish dancer (I competed throughout my childhood and teens within CLRG, and in recent years found myself competing in adult ceili competitions at the Oireachtas and North American Nationals - wildly fun experiences altogether.)

At 30 years old, I lived through the era where Irish dancing went, very rapidly, from quaint and traditional to a sport with elements of pageantry. When I began Irish dancing, some limp curls and a frock with Celtic knots sufficed. When I decided to stop competing before heading to college, 5-pound wigs and sequins were the order of the day (and, by and large, still are).

Whether the evolution is good or bad is entirely another discussion.

Of course, one of the other big changes between then and now is the advent of social media. Irish dancers of all ages are now armed with cell phones and tech gear connected to Facebook, Twitter, Instagram and some other platforms that, at the elderly age of 30, I am probably not totally familiar with. Pictures and videos of Irish dancers are not only recorded, but they’re shared, and shared quickly.

To find pictures or videos from my relatively not-too-long ago early days of Irish dancing is a treat. Imagine, then, my delight when I discovered @Once_Upon_A_Feis and its feed of Irish dancing pictures from the early 2000s and earlier on Instagram.

I reached out to the account’s owner, who wishes to remain anonymous in the hopes of fostering an online community that isn’t exclusive to any region or organization, to learn more.

The account's owner told me: “I’m a former dancer from the 80s and for nearly 30 years I had no idea what was happening in the Irish dancing world, so imagine my surprise when my child started lessons and I went to my first Feis in 2018!”

“A lot had changed and it made me nostalgic for the Irish Dancing I grew up with. I looked online for a page of old photos or a website devoted to Irish dancing history but couldn’t find much, so I started this account for myself just to have somewhere to save all of the wonderful old photos I was finding in different places.

“At first the account was private and I just used it for storage, then I decided to make it public in hopes people send me their old photos to add to my collection and they did!

“At first, it was strictly 2000 and before, but I kept getting sent more recent photos, so it’s probably only photos from the last decade that aren’t included as there’s more than enough accounts out there featuring those dancers since they’re competing in the age of social media.

“I’m happy to feature anyone who’s ever danced - from 4-year-old beginners to 24-year-old world champions," the owner said, "It’s been wonderful to see all of these old photos from around the world.”

You can check out hundreds of old Irish dance pictures on @Once_Upon_A_Feis on Instagram.

Are you an Irish dancer? What was Irish dancing like when you were younger? Share in the comments!