'Twas the night before Christmas... in Cork

"'Twas the night before Christmas, on the banks of the Lee, with Christmas lights twinkling along Merchants Quay." 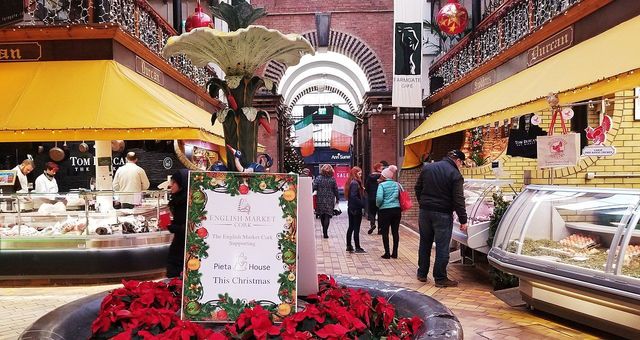 This Christmas we look back on our happy memories and look forward to better times ahead.

Home is where the heart is at Christmas. With COVID many will be able to make the traditional voyage home. Traditionally it is a time of joy and hope and family. Yet this year will be different. Phone calls and Zooms will replace hugs and kisses.

Presents will arrive in the post rather than be delivered in person. While this Christmas will be hard and lonely for many, both home and away, let us look back on our happy memories from times gone by and look forward to better times ahead.

'Twas the night before Christmas, on the banks of the Lee,
with Christmas lights twinkling along Merchants Quay.
Now Santa was coming to visit the city,
from Northside to Southside both places so pretty;

Those collecting for Share were long gone to their homes,
While their Mams and their Dads sat watching their phones.
With thoughts of their loved ones in far off distant lands,
‘twas the season of goodwill and they knew all would be grand

He arrived in the city without too much noise,
to deliver the presents for the good girls and boys.
He was thrilled to be back in the city he loves,
as he wrapped up all warm with red hat and black gloves.

The grand bells of Shandon played their music by night
While the city of Finbarr shone with delight
The winding of buses on the cold roads of night,
From Knocknaheeney to Mahon all painted in white

He flew over Patrick Street, the lights glistening below
with a nod to Father Mathew all covered in snow
The Coal Quay was quiet, not a tree to be found
As he cruised in his sleigh above streets all around

With a long night ahead and 8 hungry reindeer,
The flight across the Atlantic always struck him with fear.
So a stop at the Market, to re-energize his team
With carrots and hot soup giving off lots of steam.

Now Santa needed some presents himself,
With tripe and drisheen, for Mrs. Claus and his head elf.
And Spiced Beef for dinner and a Holly Bough too
With dreams of relaxing and nothing to do.

But back to his task and out to the cold,
“The children are waiting”, to the reindeer he told
He took out his book to see who was naughty or nice
But knew that in Cork, he need not have looked twice

There was the little boy Sean who hailed from Blackpool,
And a young girl called Caitlin who was the epitome of cool
With a Joanne and an Aimee amongst many others
And a toddler named Violet with a little new brother.

From the Mardyke to Mayfield and all over Cork City,
The wet mushy snow, made the rooftops so gritty.
And Christmas lights and decorations along so many roofs
There proved many a crash landing for 32 little hooves.

But this was the one night that Santa knew best,
With grips on his boots to survive the most slippery test
He filled his red bag with requests he children had sent
And with a wink and a whistle down the chimney he went

He arrived in a house, the kids all asleep,
The old dog named Sprig did not give but one peep.
He wiped all of the soot off his red velvet suit,
As he carried the bag overflowing with loot

He placed all of the presents right under the tree,
A bike and a book and a hurling jersey
After a glass of Tanora and a bag full of Taytos
He gave a skip and a jump and up the chimney he rose

He completed his work without too much hassle,
And he swept down the Marina and past Blackrock Castle
And I heard him exclaim as he knew all was alright,
“Happy Christmas to all, and to Cork a good night.”