Review of "People Like Me" by Lynn Ruane. Few voices ring out as clearly as those who have long been oppressed or silenced. 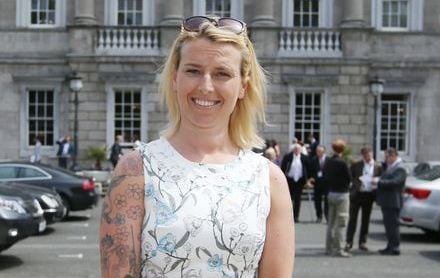 Few voices ring out as clearly as those who have long been oppressed or silenced. In her heartfelt memoir "People Like Me," author Lynn Ruane tells the gripping story of her working-class Dublin life, the kind of life that rarely gets a hearing elsewhere and so she does it with the kind of detail those who have been waiting years to speak up bring to a written work.

Ruane's book is inspirational in the truest sense, telling the tale of a young woman who is buffeted by challenges and violations that could undo someone twice her age and yet still finding the courage to fight back, time after time.

Growing up in a loving home in the hardscrabble suburb of Tallaght, she lost the run of herself in her early teens, falling under the influence of drugs and taking that well-worn stepping stone toward petty crime and violence.

By the age of 15, she was pregnant with her first child, no longer attending school, and further unsettled by some shocking events in her personal life. But unlike so many, she steeled herself for the trials ahead by committing herself to the task of rebuilding her life from the ground up.

Read more: P.S. I Love You sequel is on its way! Are you ready?

As her daughter started flourishing, she inspired her late to the party mother to begin the hard task of finding her way out of the years of hurt and heartbreak toward her wished for life.

What Ruane knew about best was all the people like herself who had been left behind. She knew about the terrible hold drugs could have over people and she knew how to talk to people battling addiction as she once had.

In fact, her path led her toward developing addiction services and then becoming an activist while she studied at Trinity College (the last place she ever imagined she'd end up) and then later on an Irish senator.

In Ireland, the personal is often political and so when the debate around consent gained momentum, she writes about how she had to take stock of her own painful past in order to talk with any insight on the issue.

Now a celebrated politician (and independent member of Seanad Éireann since 2016), Ruane is a well-known champion of progressive causes, including the reform and modernization of Irish drug treatment and counseling, education access for all, women's reproductive rights and LGBTQ rights.

Ruane's journey from addiction and teen pregnancy in the overlooked suburbs to the center of power in the Republic is one that should inspire us all and she has rightfully become an admired public figure, but this book reminds us of the what a hill she had to climb.