The lads lost the title to a group in Japan a few months ago and are eager to get it back. 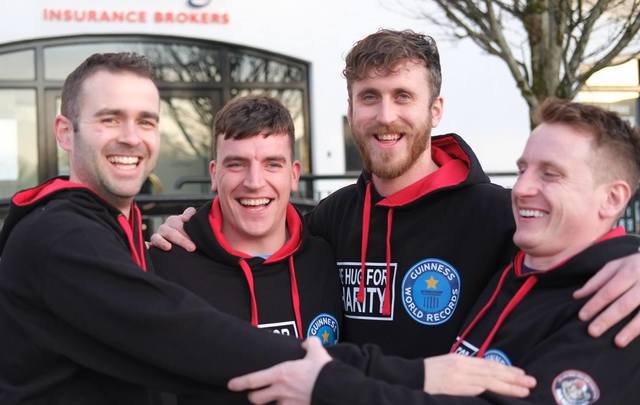 A hug for charity? These Mayo men are looking to win back the longest marathon group hug world record.

Four Mayo men are coming together to attempt to win back their world record for the longest marathon group hug.

Stephen Rattigan, Brian Cawley, Nicky Kearney and Robert Tuomey previously held the title in 2017 when they broke the 25-hour record in raising $5,000 (€4,500) for the Irish Cancer Society.

The title was taken from them a few months ago, however, by a group of students from Japan but the Mayo men are not backing down. Having their record broken by just 15 minutes, the Irish group are set to this time stand and hug for some 30 hours under a marquee in Market Square, Castlebar, Co Mayo on May 4.

Imagine how tired your arms would be after a 30-hour hug!

The new target also aims to raise over $6,000 this time for the Irish Cancer Society.

Image: The Hug for Charity/Facebook.

“That weekend in Castlebar is Mayo Day which is promoting Mayo and different events around Mayo," Rattigan told the Irish Mirror.

“We’re doing this for longer this time.

“Your muscles tend to seize up and what not but we’re looking forward to raising money.

You can donate towards the cause at  www.idonate.ie/thehug.

Have you ever done anything crazy in the name of charity? Tell us about it in the comments section, below.