Boston Irishman reveals all about living in Ireland

Larry Donnelly's "The Bostonian" is an "education to read" as he provides a "unique political perch" as an Irish American voice that resonates in Ireland. 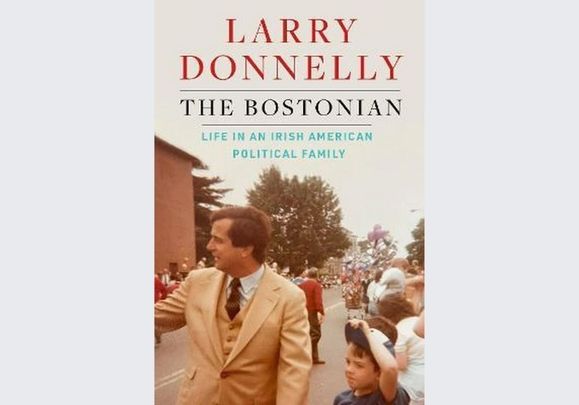 "The Bostonian" by Larry Donnelly.

Larry Donnelly’s memoir "The Bostonian" (Gill Books) is a cracking good read, especially if you have ever imagined fulfilling your dream as an Irish American and moving back to Ireland.

Now living there almost 20 years and a very familiar voice on Irish media, especially on American political topics, Larry Donnelly teaches law at University College Galway and has a keen eye and deep insights into Irish politics and life.

Donnelly was a rising young lawyer in Boston but dissatisfied when he made the life-changing decision in 2002 to move to Ireland where his grandfather had emigrated from.

What Irish Americans have not allowed their thoughts to stray to such an eventuality at some point? Donnelly has clearly made the transition successfully, but his book still benefits by the fact that he retains an outsider’s perspective on Irish life.

It should be stated that Donnelly is a member of a famous Irish Boston political family, with former Congressman Brian Donnelly of Donnelly visa fame the best-known member.

Indeed there is a remarkable section on Brian Donnelly, a genuine hero to tens of thousands of Irish from the 1980s when he piloted the Donnelly visa program through Congress allowing 40,000 Irish, many who were living illegally in the U.S., to become U.S. residents.

Donnelly was that rare politician who often seemed reluctant in the limelight. He ended his political career prematurely but his work on legalizing the Irish will never be forgotten.

Like his uncle, Larry Donnelly is a classic Boston political creature whose insights into issues such as the busing crisis in Boston -- which defined his childhood and where he comes firmly down on the side of the residents who opposed their kids being shipped to faraway schools -- pulls no punches.

His analysis of the disastrous decision by Judge Wendell  Arthur Garrity in 1974 to create busing and uproot black and white children and send them to schools far away is excellent.

In the process, busing destroyed the public school system, denuded neighborhoods as white flight followed, and allowed a racist mindset to take hold. Yet busing is somehow still written about approvingly by 'woke' commentators.

The solution of course was to fix the schools where kids went to school and spare no expense doing it.  Donnelly says the controversy dominated his childhood years and he writes incisively about it.

Despite his Democratic Party credentials, Donnelly actually began his interest in politics by getting elected as a Republican to a town council position. His description of the gravitational pull across the aisle to the Democratic side is a fascinating insight into an unusual political journey.

His analysis of Irish politics benefits from an outsider's view. He correctly states there are actually only minor differences between Fianna Fáil and Fine Gael, the two parties that have dominated politics since the country’s inception. You'd never think it at election time, but it really is Tweedledum and Tweedledee.

His analysis of Sinn Féin is quite acute. They certainly have the Republican vote and the angry working-class vote, but whether the party can muster a significant middle-class vote to build on that foundation remains the big question.

Donnelly addresses anti-Americanism in Ireland and states baldly that it exists and what he thinks the reasons are. As a concerned Catholic, he voted against legalizing abortion yet he understands the forces at play, including the downfall of the church over sex scandals that made it possible. He is frank in admitting he disliked the idea of gay marriage, but then so too did Barack Obama and they both ended up supporting it.

At the heart of his time in Ireland is a love story. He marries Eileen Whelan, one of Ireland’s best-known TV journalists. His delight at raising her child and the son they have together shines through.

Donnelly provides a thoughtful analysis of why Irish America has shifted right, and it's hard to disagree that the left in the Democratic Party has taken too many extreme positions for many Irish Americans.

His Boston basics advice to President Biden is clear -- do the bread and butter stuff that the old-time pols like Tip O'Neill and others did to take care of communities.

Larry Donnelly has a unique political perch, an Irish American voice that resonates in Ireland. His book is an education to read.