The Lambeg drum, loyalist symbol, mixes it up with Irish dancing

Frequently used during loyalist marching season, the Lambeg is winning over nationalist communities thanks to a new music video. 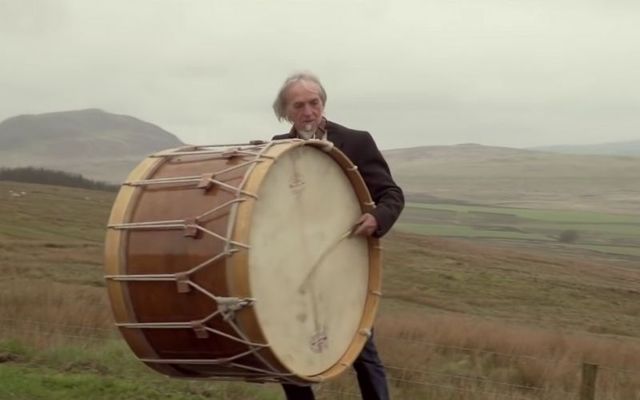 A Lambeg in action during the Lambeg Boogie. David McClean YouTube

The notorious Lambeg drum used  during loyalist marching season in Northern Ireland could help bridge the divide between nationalists and unionists this summer.

The Lambeg drum is one of the loudest musical instruments in the world and is frequently used during Orange Order marches on July 12, but it is now winning fans in nationalist communities thanks to a new music video.

"The Lambeg Boogie" fuses the drum with electric guitars and Irish dancing, amalgamating two distinct cultures in the hope of inspiring reconciliation following months of turmoil in Northern Ireland.

"Everybody shout, shake it all about, Lambeg Boogie makes you feel all right."

The feelgood song and music video have received widespread praise on a variety of social media platforms, with viewers praising it for how it blends the two cultures.

The song has earned praise from both sides of the divide in Ireland.

Dublin-based poet Ciarán Ó Coigligh described the song as an "excellent gesture of reconciliation", while former Alliance Party leader Lord John Alderdice said that it was a "brilliant piece of fusion".

Drennan told the Guardian that he wrote the song simply as a fusion of traditional Ulster-Scots music, blues, and rock and said that he wasn't trying to make a statement. However, he said that he is delighted with how the song has been received.

"It’s refreshing to do something that cuts across politics. We weren’t trying to make a statement … but the fact that it does is a bonus," Drennan said.

The Ulster-Scots musician hopes that music can help bring people together in Northern Ireland and has previously performed with the Lambeg at Irish music festivals.

Tensions between nationalist and unionist communities reached a fever pitch in April when loyalist youths took to the streets of Belfast during nine days of continuous violent rioting which resulted in the injuries of almost 100 police officers.