Before he met his tragic end, President Kennedy delivered some of the most iconic speeches of the 20th century. Here we take a look at his most inspirational quotes. 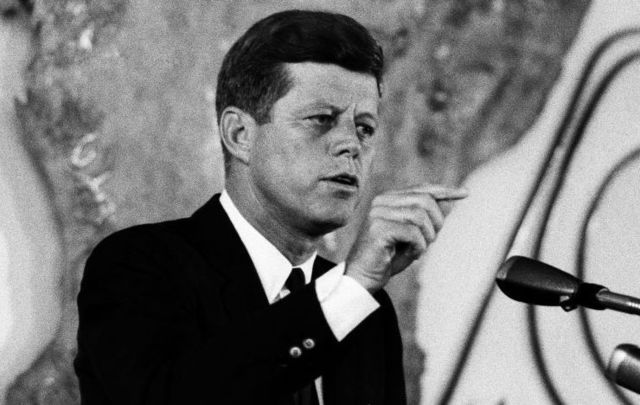 John F. Kennedy delivered some of the most iconic speeches of the 20th century before his tragic death.

President John F. Kennedy, a spectacular orator, is now remembered as an icon of inspiration in the wake of his tragic assassination.

Read More: On this day in 1960, John F Kennedy won the US Presidential Election

Kennedy, proud of his Irish roots and strong links to Irish America, led the United States into a period of enormous change, introduced civil rights legislation, and even paved the way for the moon landing, but what many will recall about the inspiring president are his choice words and rousing speeches.

From his address in New York City to the National Association of Manufacturers on December 5, 1961:

"We must use time as a tool, not as a couch"

From Kennedy's inaugural address in Washington, DC on January 20, 1961:

"My fellow citizens of the world: ask not what America will do for you, but what together we can do for the freedom of man.”

From his address in the Assembly Hall at the Paulskirche in Frankfurt on June 25, 1963:

“Change is the law of life. And those who look only to the past or present are certain to miss the future.”

You can watch President Kennedy's address at the Paulskirche here:

Read More: Photos of JFK and Jackie Kennedy “wedding of the century”

From President Kennedy's address on the First Anniversary of the Alliance for Progress on March 13, 1962:

You can watch a piece of President Kennedy's speech here:

His address before the 18th General Assembly of the United Nations on September 20, 1963:

"We have the power to make this the best generation of mankind in the history of the world - or make it the last."

You can watch his speech at the UN here:

What's your favorite quote from President John F. Kennedy? Let us know in the comments