Laura Weber, owner of the NYC-based atelier LWPearl, created the stunning embroidery on the evening ensemble worn by the First Lady. 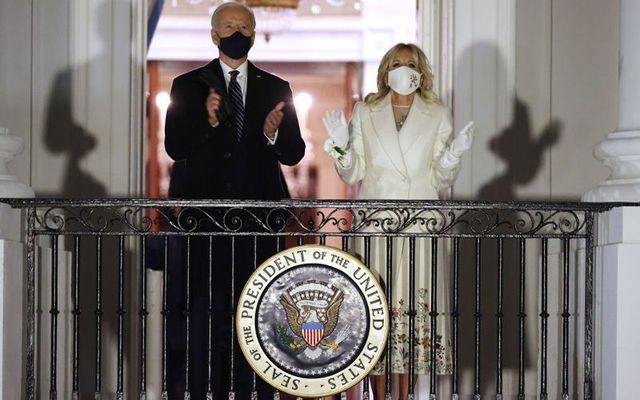 U.S. President Joe Biden and First Lady Jill Biden watch a fireworks show on the National Mall from the Truman Balcony at the White House following the inauguration ceremony at the U.S. Capitol on January 20, 2021 in Washington, DC. Chip Somodevilla/Getty Images

Weber, a National College of Art and Design graduate, created the embroidery for Dr Biden’s white cashmere coat and silk wool cady dress, which was designed by Gabriela Hearst.

Weber, who owns the NYC-based atelier LWPearl, said the outfit was a "labor of love...that took hours, days and weeks of work."

Weber and her team began working on the outfit on December 9 and handed it over on the Monday before inauguration day, reports RTÉ.

"We developed each flower for each US State and Territory. We chose every bead, every stitch, every stitch direction, every color, and we prototyped all of those and when they were approved we lay it out," she explained.

Inside the coat was a special message hand-embroidered on the lining that paid homage to Dr Biden's role as an educator.

"Tell me and I forget. Teach me and I remember. Involve me and I learn,” it reads.

Weber said: "It was a personal message for Dr Biden...a Benjamin Franklin quote about her teaching."

In addition, all of the flowers were specifically placed on the ensemble.

Uruguayan-American designer Gabriela Hearst said the ensemble was inspired by a message of unity. “Unity makes strength and it is needed for the road ahead. The blooming symbol to represent this message are the federal flowers from every state and territory of the United States of America,” she wrote on her Instagram account.

Weber, who is from Rathfarnham, studied textiles and embroidery at NCAD in Dublin. In 2013, a year after graduating, she moved to New York.

“I had moved over here with no plan, no job, no nothing. But I did it anyway and I landed a job on my first day,” she told Evoke.ie.

Six years after beginning her first job an embroidery studio in New York’s Garment District, Weber set up LW Pearl, an embroidery and embellishment atelier.  Weber has worked for top designers such as Dolce and Gabbana and Marc Jacobs, and her designs have been seen on celebrities like Beyoncé, Lady Gaga, Anna Winter, Michelle Obama, and Saoirse Ronan.

The Irish Examiner reports that Weber and her husband Joseph Rein are planning to launch a luxury athleisure brand later this year. She is also currently working on a line of luxury face masks.

The Irish designer said she was stunned by the reaction to her work following the inauguration.

“I couldn’t believe the reaction, it was mind-blowing, I never expected so many people to reach out. There were so many people sending me messages with the most gorgeous words of kindness and congratulations. It was just so eye-opening, I would have never ever have imagined it.”

Dr Jill Biden’s inauguration ensemble will be donated to the Smithsonian museum’s First Ladies’ collection, where Weber’s beautiful embroidery will be on display to the public.