Senator Bernie Sanders was pictured all around Ireland this week thanks to a viral meme featuring a picture of him at Joe Biden's inauguration. 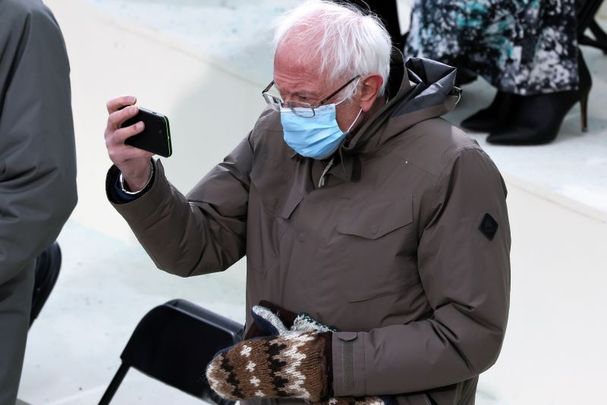 January 20, 2021: Sen. Bernie Sanders (I-VT) at the inauguration of US President-elect Joe Biden on the West Front of the US Capitol in Washington, DC. Getty Images

The eyes of the world were on Washington, DC on January 20 for President Joe Biden and Vice President Kamala Harris’s inauguration.

However, it was Vermont Senator Bernie Sanders who spurred a meme that has since gone viral around the world, including Ireland.

Sanders, who himself was in the running for the Democratic presidential nomination in 2020, was photographed at the inauguration looking relatively unimpressed and donning a heavy winter coat and knitted mittens.

The picture of Senator Sanders, originally captured by photographer Brendan Smialowski of the Associated Foreign Press, has since given way to countless memes:

The photo that launched a thousand memes today was taken by AFP's Brendan Smialowski. His wonderful Instagram here: https://t.co/0NTXZCujLV pic.twitter.com/zs9Sg2qfaJ

Of course, it didn't take long for people in Ireland to give the newly viral Bernie Sanders meme the Irish treatment. Check out a few of our favorites here:

Hope you had a smooth flight, Senator Sanders!

Bernie was spotted at the famous Grogan's Castle Lounge pub in Dublin:

We knew we recognised this guy at the Inauguration from somewhere🤔 https://t.co/GEbMH8fx1p

Across town, Sanders was then spotted outside the historic Jameson Distillery:

Our number 1 fan.
First in line for when we get to re-open 🙌#BernieSanders#HookLighthouse #berniesmittens #Ireland pic.twitter.com/mq2ly7N1lH

A busy man, Senator Sanders even got to travel back in time to 1890s Gweedore!

Bernie Sanders? Just one of the Derry Girls.

Bernie Sanders is a Derry Girl from here on out. pic.twitter.com/cnVQCzr9FP

No visit to Ireland is complete without experiencing Co Galway:

Classic photo op for Bernie 🙄😂 Shame he had to miss the inauguration!!

If only he had used https://t.co/muGnH79D57 to plan his trip to Galway, he would have discovered all the hidden gems the county had to offer 👌💎

He graced the midlands - Co Offaly, to be exact - with a visit:

Bernie Saunders getting away from it all by taking in the sights of Co Offaly in Ireland. 😀😀 #BernieSanders pic.twitter.com/Pu2FzBxo5I

He even made it up to Co Monaghan:

The longtime Vermont Senator paid a visit to the People's Republic of Cork:

Then he popped over to Co Kerry to visit the world-famous Great Blasket Island:

Someone has created a site where you can enter any Google address and put Bernie Sanders sitting there. I obviously put in the Great Blasket and it has brought me a lot of joy. https://t.co/gJLku2Xepv pic.twitter.com/pxEewzvub5

However, it appears it wasn't all fun and games for Senator Sanders in Ireland - at least not when the cows are calving!