Dating back to 1801, destined for the Caribbean, this Guinness stout now accounts for 45% of the Dublin breweries sales. 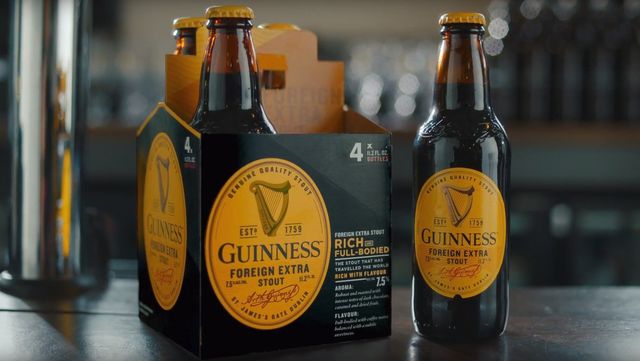 Guinness Foreign Extra Stout is a beer brewed to stay fresh over time and distance, as the British Empire expanded Arthur Guinness saw a quickly growing market. Over 216 years later Foreign Extra Stout makes up 45 percent of Guinness’ global sales and is massively popular in Asia, Africa and the Caribbean. The history is fascinating.

Guinness can trace the origins of Foreign Extra Stout back to 1801 and the original recipe of West Indies Porter. Originally brewed to withstand long journeys, the use of higher gravity and more hops resulted in a bold tasting beer with a complex flavor profile.

Guinness Foreign Extra Stout is a beer born of a thirst for adventure, tracing its origins back to a recipe for our West India Porter, first set out by Arthur Guinness II in 1801.

Read more: Have you ever tried the Guinness brewer’s favorite stout?

In the early 1800s, while other breweries were content to stay close to home, Guinness struck out into unchartered territories, braving the perils of sea travel to export our famous black beer across the globe. Brewed with more hops to preserve the beer in the ships’ holds during voyages of four-to-five weeks in tropical climes, the recipe yielded a powerful drink with a complex, fruity bittersweet flavor.

While their proudest invention to date arrived to be embraced by rest of the world, back in the brewery the team remained focused on the journey ahead. What was then known as West India Porter became the Foreign Extra Stout enjoyed today. But as the body evolved, its soul remained the same. It's where tradition meets innovation. And we're proud to transport that across continents.