Have you ever tried the Guinness brewer’s favorite stout? 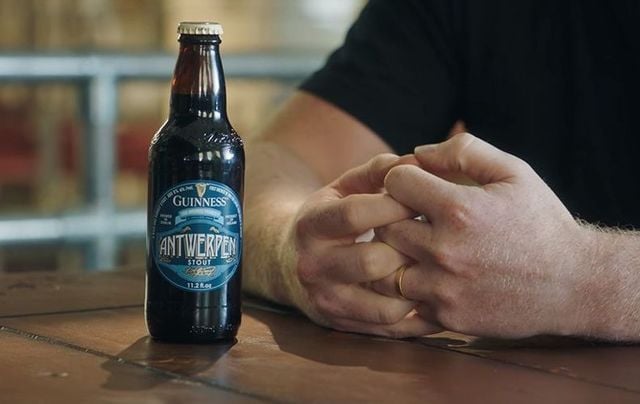 Guinness Antwerpen Stout was brewed for the first time in 1944 for its namesake: the Belgian city of Antwerp. Though known by a different name – Guinness Special Export – it's still a fan favorite in the European city.

This 8% ABV stout has long been sought out by connoisseurs for its intense union of roasted malt, smoked wood and dark chocolate notes. In this short video Guinness’s chief archivist joins brewers in sharing the story behind the much sought-after export, long known to Belgian beer lovers as Guinness Special Export Stout.

The beer won everyone over with its intense roasted malt, smoked wood, raisin and licorice notes and its sweet smells of bittersweet chocolate, coffee and a touch of black currant. In fact, even the brewers within St. James's Gate have been known to line up for a few bottles before the beer makes its way to Belgium.

"It's been more than 70 years since we first exported the Antwerpen Stout from Dublin to Antwerp, but its cult following is probably stronger than it's ever been," noted Padraig Fox, the General Manager for the Open Gate Brewery Experience. "I guess now the secret is out. Even if it is only for a few months, we're happy to see this Guinness favorite having its moment in the U.S."

This beer fights right in at Guinness, a brewery that has been doing things differently since day one. In the late 1700s, Arthur Guinness – along with just about every other brewer at the time – was paying the bills with a steady production of ales. That all changed in 1799 when he chose to switch things up from those ales and focus more on darker, stouter beers, including the iconic stout the world knows now. A couple of centuries later, this taste for innovation would also lead to the world's first nitrogenated beer.

Whether enjoying a Guinness Antwerpen Stout or any other brew in the Guinness family, please remember to respect the beer and drink sensibly. For more visit www.guinness.com.