The City of the Tribe’s busking community has long been regarded as one of the best things about the city, but could new laws see the tourist attraction diminished? 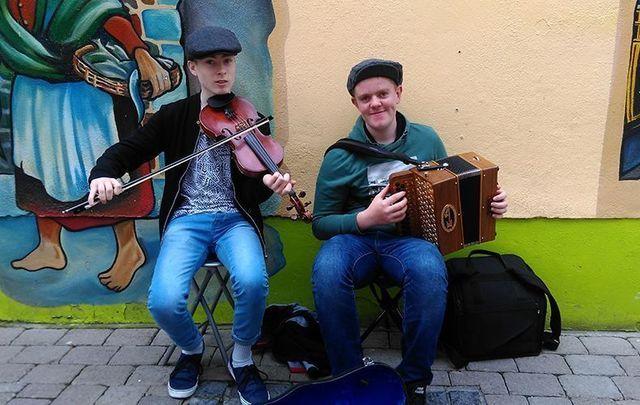 Galway city busking could come under threat if new laws are introduced.

The wonderful street entertainment which draws visitors back to Galway city center every year is under threat as the city authorities prepare to introduce new restrictive busking bye-laws.

Buskers, street artists, and entertainers have come together to fight the proposed new city laws which they fear may bring an end to much of the on-street entertainment which Ireland’s western city is famous for.

Members of the public have until December 20 to make submissions to Galway City Council and the buskers have urged people all across the globe to get in touch with the local authority to express opposition to the proposed changes.

A spokesperson for the street entertainers, Niceol Blue, said it was ironic that the city planned to introduce “restrictive and ridiculously vague” bye-laws as Galway looks forward to becoming the European Capital of Culture in 2020.

“These byelaws will kill the best busking in Galway. They will ruin the lovely bohemian atmosphere that Galway is famous for. And it will do it just in time for Galway 2020,” she told IrishCentral following a meeting of street entertainers in the city this week.

“We are completely against these anti-busking bye-laws, which have now been put out for public commentary. We believe they are very poorly written, incredibly vague, and wide open to interpretation. We believe some of them are ridiculously restrictive.”

Traders in the heart of the medieval city have expressed concerns for some time about the volume of amplification used by some buskers, the quality of the music, and the difficulties shoppers have in accessing businesses when huge crowds congregate outside.

Famously, international pop star Ed Sheeran began his career as a singer on the city’s streets a decade ago and many top acts, such as the Galway Street Club, attract massive crowds on Shop Street or High Street during the peak tourist season.

The proposed city laws, adopted by the City Council last week, say that a street entertainer cannot “act, say, do, or sing anything” that might cause offence to a member of the public, business owner or council official.

Blue, an Irish citizen who is originally from the United States, described this clause as a form of censorship of the city’s celebrated street artists.

Another part of the law stipulates that a street performer must “immediately cease a performance” when a crowd gathers, without giving a clear definition of what exactly constitutes a crowd.

“They don’t define a crowd. Who can define what a crowd is? How long do you have to stop? These laws are ridiculously vague and could well discourage the best buskers from performing here,” said Blue.

She said the buskers were also unhappy with aspects relating to amplification before and after 6pm, claiming that the local authority did not consult with the entertainers who do so much to boost the image of the city.

Street theater has also been effectively banned before 6pm, as it requires the reservation of a specific space away from the narrow medieval streets which are thronged during the peak tourist season.

Blue has urged anyone who has an objection to the ban to read the proposed bye-laws on the Galway City Council website and to send a submission to environment@galwaycity.ie by December 20 next.

The Mayor of Galway, Pearce Flannery, has described busking as “precious resource” which adds character and variety to the heart of the city.

But he said there were clear problems with amplification, which drowned out competing acts on the streets and made life difficult for shopkeepers who were forced to listen to the same songs over and over again.

He also opposes the bye-laws, because he says buskers should not be allowed to use any kind of amplification. But he believes that the bigger ‘circle acts’ should be moved to designated spaces at the Spanish Arch and Eyre Square, because the crowds are blocking the entrances to business in the centre.

“To be fair, there are more people involved in this debate than just the buskers,” he told IrishCentral. “We are trying to accommodate everybody. I am fully in favour of the buskers. They add so much to the character, vibrancy and atmosphere of Galway.

“But there are problems in the heart of this medieval city when people cannot get through because of the crowds or when some acts ‘bully’ others by the use of amplification. You do have a situation where some acts drown out others, especially in the summer time.”

Walking tours around Galway city are sometimes disturbed by buskers

Brian Nolan, who runs http://www.galwaywalks.com/, has been leading walking tours of the city center for the past five years.

He told IrishCentral this week that there is a problem with some buskers using amplification to drown out others or acts who block access to the main streets during the peak season.

“There are a few things that bother me,” said Mr Nolan. “I do believe amplification is out of control. Some buskers are so loud that people won’t go near them and they’d actually do way better if people could stand nearer to them. A lot of the buskers are using loud backing tracks and they absolutely don’t need them.”

He said that the visitors on his tours, mostly from the US and Canada, love to hear ballads by the likes of the Wolfe Tones and The Dubliners sung with gusto on Galway’s streets.

“People from the U.S. love the ambience of the city and they tell me it’s like Bourbon Street in New Orleans during ‘Mardi Gras,’” said Nolan. “In summer, they could enjoy fire eating, a girl on a hula-hoop, an Irish traditional dancer, and a ballad singer in the space of a few hundred yards. The variety can be amazing!”

Sometimes, though, he has to move his walking tours on quickly because of the poor quality of a minority of the acts.

Read more: This Galway street band is racing their way toward fame

Belting out the ballads on Shop Street, where traders have complained about amplification. Photo: Brian Nolan, galwaywalks.com

“I reckon most North Americans want an authentic Irish experience when they come to Galway,” he said. “They most certainly don’t want to hear songs by Johnny Cash, John Denver, or Bob Dylan booming out through an amplifier. It’s not fair on a shopkeeper, either, to have to listen to a fella playing the same Bob Dylan song all day!

“They absolutely love to hear Irish music or to see Irish dancers on the streets of Galway and they tell me they don’t need amplification. Some acts are just painful and some don’t respect the unwritten code that people play for an hour and then move on. I would say that some regulation needed to be brought in.”

Businessman Niall McNelis, who is also a member of Galway City Council, agrees. He said that a Code of Conduct introduced by the buskers themselves did not work and amplification was a huge issue with some traders.

“Do you think it’s fair on businesses who pay rates that people cannot get in the front door of their premises?” he asked. “When there’s a busker using amplification outside my shop on Quay Street, I cannot even talk to my customers. Something has to be done.”

Have you enjoyed the entertainment of buskers in Galway City? Have they been too loud or blocked your passage on the streets? Let us know your thoughts on the new bye-laws in the comments section, below.

Ciaran Tierney is a journalist, blogger, and digital storyteller, based in Galway, Ireland. You can find him on Facebook at http://facebook.com/ciarantierneymedia