This Galway street band is racing their way toward fame 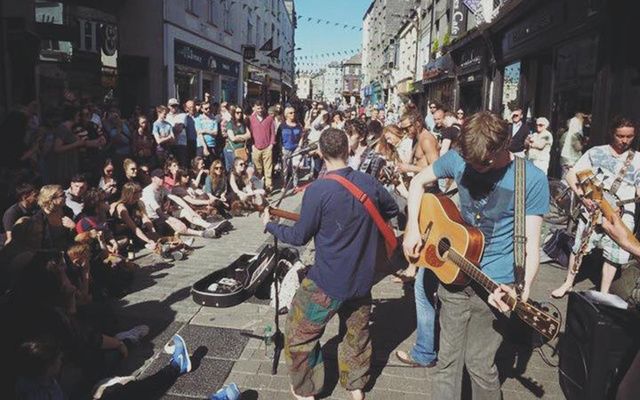 A Galway street band have been tipped as on the fast track to fame after coming together purely through chance.

The group formed in 2016 and with up to 15 people playing together at one time they’re difficult not to spot when walking through the City of Tribes.

“For me, it all started in March last year when I had originally planned to visit Galway for a couple of weeks before getting on with my life and going back to college,” fiddle player Merle told Joe.ie.

“A dear friend of mine who I knew from years back asked me if I wanted to make some quick money during my stay and go busking with this band he'd started playing with recently.“I said yes, expecting a three-piece trad band or something like that, but boy was I wrong: There was about twelve of them who had just started jamming together a few weeks previously."

The band is mostly Irish but members hail from around the world, including the US, Germany, and Russia.

That diversity adds up a musical style that draws from genres around the world.

“With so many different nationalities and personalities in the band, there is a convergence of influences, which gives a pretty varied sound! We play folk, rock, blues trad, ska, whatever we can really,” cajon player Shane Scally added.

The band ended up winning an open mic night in the local Róisín Dubh nightclub and things took off from there.

Band member Laura was spending a year studying abroad in France and two others were planning a trip to see her; so the rest of the gang decided, why not join them all?

“They were going to France and everybody else was like ‘well if we’re going to do it, we might as well try’,” American-born guitarist Spud Kennedy told the Connacht Tribune.

The group just “fell into a tour” he added.

Like most Irish student adventures, it was done on a shoestring budget and the band packed eight people into a one-bedroom apartment and cooked out of a coffee pot “because we had nothing else to cook with.”

But the tour was just the beginning and the band now has over 11,000 likes on Facebook and has played gigs all over Ireland.

Not bad going for a band that came together wholly through chance and good fortune.