Niall Quinn and Brendan Pooley's "10,000 Candles in the Wind" is a fitting tribute for Fungie the Dolphin. 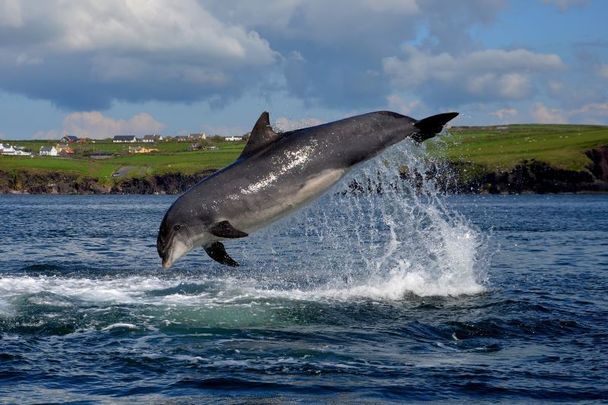 Irish men Niall Quinn and Brendan Pooley recorded a heartwarming tribute to one of Ireland’s most beloved residents, Fungie the Dolphin, after the male bottlenose disappeared from his longtime home in Dingle Bay off the coast of County Kerry.

"5,000 Candles in the Wind" is, of course, a play on Elton John's 1973 song "Candle in the Wind," which was a tribute to Marilyn Monroe and later Princess Diana.

“Up in dolphin heaven, here’s the thing,” Quinn and Pooley’s tribute opens, “Change your dorsal fin for angel’s wings."

Fungie was first reported missing in October 2020 and sadly hasn't been seen since. The loss of Fungie is a story that gripped the hearts of Irish people around the world.

Quinn told IrishCentral: “To be honest my main worry with the song was whether it would offend people, especially the people of Dingle, due to its comedic nature.

“While the song may be humorous, it is sincerely intended as a tribute to Fungie.

“Fungie the Dolphin is loved by the Irish people and a bona fide national institution, I wanted to commemorate him in my own way."

Quinn said that writing the tribute wasn't all too difficult: "I just rewrote the lyrics and recorded the vocals and then sent that to a producer - bandmate friend Brendan Pooley, who recorded all the instrumentation and mixed in my vocals."

Quinn said the feedback to the song - which has nearly 8,000 views on YouTube at the time of publication - has been “slightly bittersweet.”

Among the comments on the video:

"Thank you for this deeply moving song which is such a perfect farewell to Fungie. He touched my heart as has your song. I had so many special moments with him and am now sad he is gone from this earthly plane but also glad his spirit flies free for us all to connect with. Namaste, Fungie my beloved friend. Go well. I will never forget you.

"Thanks for this beautiful video...I'm italian and I stayed in Dingle several times because I love this town and part of Ireland...Fungie is something more than a wonderful dolphin, it's a legend and especially in this very difficult period of our lives, we desperately need such beautiful and special stories like that of our friend Fungie...I don't think that Fungie will come back in Dingle's bay but I'm sure that will forever remain in the hearts of all people who live in Ireland or who love this beautiful Island as intensely as I do.

"This is the single most important thing posted on the internet. Come home fungie."

Quinn said: “I am delighted with the positive reaction, that people seem to be taking the song as it was intended, a fun genuine tribute to an Irish Legend.

“I am just saddened by the fact the song was even necessary in the first place.”