Using American hops and Guinness' world famous 125-year-old Guinness yeast this Pennsylvanian beer bring the best of Ireland and the United States together… And we’ll raise a glass to that! 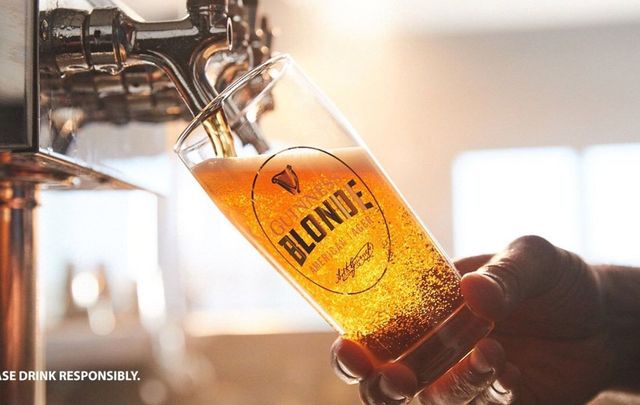 Using American hops and Guinness' world famous 125-year-old Guinness yeast this Pennsylvanian beer bring the best of Ireland and the United States together… And we’ll raise a glass to that!

Read more: Guinness ad with Cillian Murphy will make you fiercely proud to be Irish American

"From sports bars in Texas to truck stops in Iowa to backyard barbeques in Montana to trendy Manhattan bars, Guinness Blonde American Lager brings the taste, color and character of great American beers and fuses them with the heritage and artistry of the Guinness tradition begun in 1759 by Arthur Guinness," said Doug Campbell, Guinness Brand Director.

As lagers continue to gain favor among beer drinkers in the U.S., Guinness Master Brewers in Dublin have collaborated with brewing experts in the U.S. to create a one-of-a-kind taste in American Lagers.

Guinness Blonde American Lager is a complex, flavorful lager with a floral, hoppy aroma that is a combination of Mosaic, Willamette and Mount Hood hops. Combining these American ingredients with the world famous 125-year-old Guinness yeast intertwines two brewing traditions – Guinness and American.

"It was great to be a part of the legendary Guinness brewing team for the creation of a unique tasting American Lager and be able to add some of my American influences throughout the brewing process," said Joe Gruss, an American brew master who is a member of the Guinness Blonde brewing team.  "In the end, we were able to combine Guinness artistry and American brewing techniques for a crisp and refreshing-tasting beer."

Guinness Blonde Lager gets its crisp and refreshing taste from American malts and hops, fermented with the famous #Guinness yeast (slightly too small to see here). pic.twitter.com/zvQ7fKWrwR

Guinness Blonde American Lager was released back in 2014 as part of the the Guinness Discovery Series, an innovative concept showcasing a range of new 'fusion brew' beer options, all to be released under the Guinness trademark.

Read more: Here’s to us all! Celebrating Guinness’ 200-year friendship with the USA

"Beer drinkers' tastes are evolving, and people are looking to try different flavors and styles, and we're excited to show what Guinness is capable of beyond the traditional dark stout with Guinness Blonde American Lager," said Doug Campbell, Guinness Brand Director.

"The beauty of this beer is that we're able to produce a characteristically American-style lager, while fusing the standards of quality and taste expected of Guinness with a taste profile and color characteristics long loved by traditional American beer drinkers."

The Guinness brand enjoys a global reputation as a uniquely authentic beer and the best-selling stout in the world.  Famous for its dark color, creamy head and unique surge and settle, this distinctive beer originated at the St. James's Gate brewery in Dublin, Ireland. Over 10 million glasses of Guinness beer are enjoyed every single day around the world, and 1.8 billion pints are sold every year.  Guinness beer is available in well over 100 countries worldwide and is brewed in almost 50. Additional information about the Guinness brand can be found at www.guinness.com.

Read more: Meghan Markle enjoys Guinness and can even pour a good pint