Pumpkin pie is not traditionally eaten in Ireland but is historically baked around the festivities for Thanksgiving and Christmas in the United States and Canada. 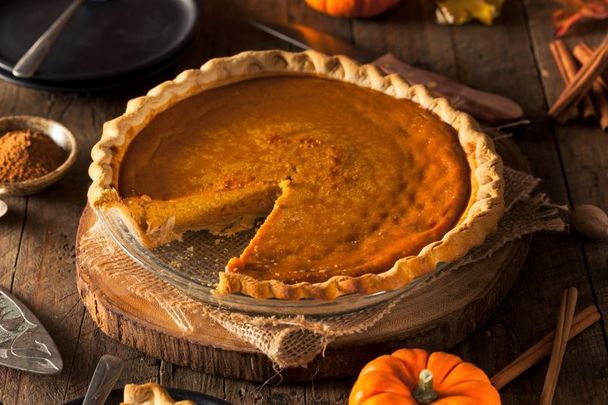 Pour yourself up an extra glass for a special treat. Getty

Our Irish chef adds a little piece of Ireland to mix this Thanksgiving recipe, flavoring this pumpkin pie with a little Irish whiskey... to keep away the chill, don't ye know!

Pumpkin pie is not traditionally eaten in Ireland but is historically baked around the festivities for Thanksgiving and Christmas in the United States and Canada. It has, however, become a more popular Halloween dish in Ireland in recent years, as many coffee shops and restaurants have been adding this sweet, mousse-like dessert dish to their seasonal menu.

So, whether you're making this pie for Thanksgiving or just for fun, I am going to add another little piece of Ireland to the mix, by flavoring my pumpkin pie with a little Jameson Irish Whiskey. You can use whichever brand is your own favorite!

There are many, many types of pumpkin, some are good for eating and some are not. The big Halloween, carved pumpkin that you see each year was bred especially for carving, with its tough, thick skin and fibrous flesh.

Pumpkins grown to be eaten tend to be heavier because they have more flesh inside. The veg shops and supermarkets sell smaller pumpkins like the French Rouge vif d'Etampes, also known as the "Cinderella Pumpkin" (it got its nickname from the fairy tale carriage). The most common pumpkin on sale here in Ireland, that is used for cooking, is called a "Becky" Pumpkin.

The first recorded recipe for "modern" pumpkin pie was published as a 'Pompkin Pudding' in 1796, in a book called American Cookery by Amelia Simmons. This cookbook is considered to be the first Cookery Book to be published by an American, in America. Only four copies of the first edition are known to exist.

A pumpkin pie is made, more or less, in the same way as a baked cheesecake or a custard tart and is flavored with cinnamon, cloves, and ginger. If you've never eaten a pumpkin pie, you could be excused for thinking that it might taste like a savory vegetable quiche - but it's really more like a cheesecake in a pastry crust! The gingernut biscuits add flavor and also help to make the base crunchier. The evaporated milk gives a richness to the pie and the Irish whiskey works just perfectly with the spices to give it a yummy warming taste sensation!

It's very simple to make and once you have the pumpkin purée made, the rest of it comes together quickly and easily. In the US, they buy canned, puréed pumpkin for use in cooking.

You can make this recipe at any time of year by substituting Butternut Squash or Sweet Potato instead of pumpkin. Their texture and taste are almost the same when flavored and cooked.

To make the pumpkin puree:

Cut a medium-sized pumpkin into wedges and discard all the seeds.
Cook the pumpkin in the microwave on high power for 12 minutes.
Scrape off all the cooked flesh and purée it quickly in a blender until smooth. (If you are using canned pumpkin purée you'll need to spoon it onto a clean tea-towel and squeeze away as much liquid as possible.)
You'll need 400g/14oz Pumpkin Purée for the pie.
To make the sweet pastry:
Ingredients

Rub the butter into the flour until it's like breadcrumbs. Add the sugar and mix in.
Break in the egg and quickly pull the pastry together adding a little cold water if needed.
Roll it out and line a floured 10" pie dish (about 1.5" deep). Trim off any extra pastry.

Crumb the gingernut biscuits in a blender or by placing them in a sandwich bag and rolling them with a rolling pin until fine.
Sprinkle the biscuit-crumb over the pastry base, pat it down and refrigerate until needed.

How to make the filling:
Ingredients

Method
Break the eggs into a large bowl and whisk them well by hand. Add the brown sugar and mix in for 30 seconds until they're thick and creamy.
Add the can of evaporated milk and mix well for about 30 seconds.

Add the pumpkin purée along with all the flavorings and mix everything together until smooth.
Lastly, add the whiskey and stir it into the filling.

I have no chef logic behind the mixing and stirring by hand. Sometimes it's just relaxing and therapeutic to slow down and do it all by hand!

Carefully pour the mix into your pie dish and tap the side of the dish a few times to help raise the air bubbles to the top. Bake in the center of a pre-heated oven at 160°C / 320°F for 40 minutes.

Check the pie as you would when testing a sponge cake. It should be soft, but responsive to the touch when it's cooked - giving you a little spring in the center when gently pushed down.
Leave the pie aside, in the dish to set, until cold.

I must admit, this was the first pumpkin pie I ever made - and it was delicious! A little dollop of fresh cream went down a treat with my Irish Whiskey Pumpkin Pie, as did the extra "wee doodley" (as they call a sneaky shot of whiskey around Donegal Town).

Give it a try and enjoy!

What’s your favorite Thanksgiving recipe? Let us know in the comment section below.

*See www.irishfoodguide.ie for more from Zack.
* Originally published in 2011. Updated in November 2022.