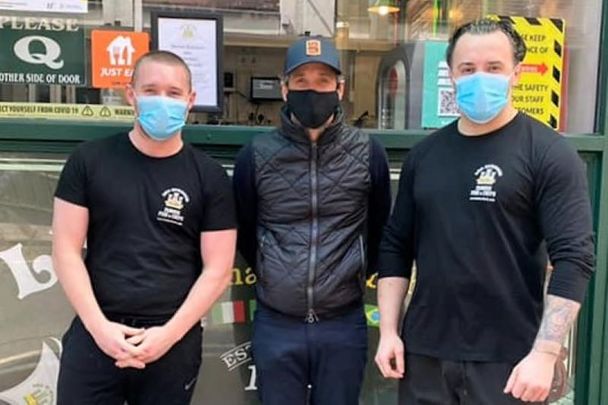 Patrick Dempsey had only the best to say after visiting Leo Burdock Fish and Chip Shop in Dublin on May 26.

Patrick Dempsey is in Ireland ahead of the filming for ‘Disenchanted,’ the sequel to Disney’s 2007 surprise hit ‘Enchanted.’

While there, the American actor - known to many as McDreamy from his stint on ABC’s ‘Grey’s Anatomy’ - is chronicling his Irish adventures over on Instagram.

After "hiding out" at the homestead of Irish woman Olivia Burns, Dempsey has now been taking the time to show some love to some Dublin businesses.

On Wednesday, Dempsey posted for his more than six million Instagram followers his rave review of Leo Burdock’s, one of the most famous fish and chip shops in not only Dublin but probably the whole of Ireland.

“Bleeding deadly!!” Dempsey said in his best attempt at a Dublin accent.

Of course, the social media crew at Leo Burdock’s also made sure to highlight today’s “fabulous” visitor:

Leo Burdock Traditional Fish and Chips has been at its flagship location on Dublin's Werburgh Street, near Christ Church Cathedral, since 1913, making the iconic chipper older than the Irish State. Founded by Bella Burdock and named after her son, Burdock's now has several locations around Dublin City.

Given its long and famed history, Burdock's has welcomed in plenty of celebrities over the years, who are now featured in the chipper's 'Hall of Fame.' Conor McGregor, Snoop Dogg, Metallica, Cillian Murphy, Saoirse Ronan, Enya, Jackie Chan, Lisa Kudrow, and Tom Cruise are but a few of the big names who have popped in for a visit, while Burdock's proudly refers to 'The Boss' Bruce Springsteen as "a regular."

Earlier in the week, Dempsey gave his stamp of approval to another Dublin business, Louis Copeland & Sons:

While Dempsey is taking in all that Dublin has to offer, Enniskerry in Co Wicklow is undergoing a thorough Disney transformation to serve as the backdrop in 'Disenchanted,' which brings Dempsey back together with Amy Adams, Idina Menzel, and James Marsden.