Here's when Shamrock Shakes return to McDonald's in the US!

McDonald's is getting ready to bust out its Shamrock Shakes ahead of St. Patrick's Day 2022! How much do you know about the minty green treat? 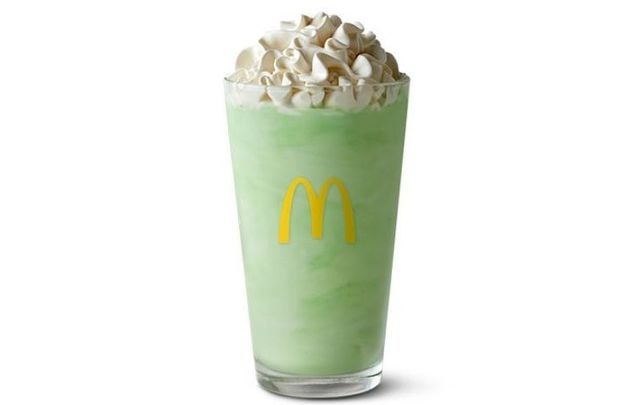 The mint green festival drink, the McDonald's Shamrock Shake, that all started with charitable act by and Irish American businessman. McDonald's

Shamrock Shakes, the beloved St. Patrick's Day treats from McDonald's, are about to return, but how much do you know about this charitable milkshake?

McDonald's St. Patrick's Day Shamrock Shakes, as well as the OREO® Shamrock McFlurry, will be available in the US from February 21, but only for a limited time.

McDonald's said this week: "The only thing more refreshing than the delicious taste of a Shamrock Shake is the way that minty green hue makes the ‘will-winter-ever-end' blues go away.

"In our 50+ years of serving up this tasty treat, we’ve never given away the secret ingredient that makes ~Shamrock Shake green~ so iconic. Until now...

"No, we didn’t just spill Shamrock Shake on our keyboard – that’s the hex code for the unmistakably minty color of Shamrock SZN."

shamrock shake is back 2.21 ☘️ made some fanart using #cbf2ac ? drop urs in the replies pic.twitter.com/fmXVVxGCDG

It may be a firm favorite treat around March 17, but did you know Shamrock Shakes were originally invented to raise money for charity?

The bright green minty treat dates back to 1970, and its story is based around a charitable act. The Shamrock Shake was developed in 1970, according to McDonald's. However, according to reports on Delish.com, Harold Rosen, who owned a McDonald's in Connecticut, claims he invented the popular holiday drink in 1966.

Imagine, the Shamrock Shake now has 21,500 fans on Facebook and is second in popularity only to the McRib, and that sandwich had a "Simpsons" episode dedicated to it!

More importantly, the Ronald McDonald House program has also exploded in size as a much-needed resource for families dealing with the difficulties of looking after a sick child in the hospital. It now has a presence in 60 countries and regions across the globe providing homes, family rooms, care mobiles, grants and scholarships that help almost 6 million families.

Kim Hill, the girl who inspired it all, unfortunately, passed away in 2011 aged 44.

Here’s a hilarious ad for the Shamrock Shake from 1983: