Roughly 5.9 million casks of Irish whiskey were sold in the US last year, up from approximately 5 million in 2020. 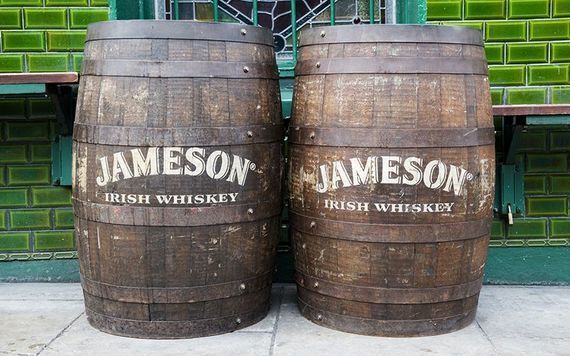 Jameson is one of the top five most-popular whiskeys in the world. Getty

Roughly 5.9 million casks of Irish whiskey were sold in the US last year, up from approximately 5 million in 2020.

Irish whiskey was the third-fastest growing category in the US last year, behind premixed cocktails and tequila/mezcal, according to the Distilled Spirits Council.

Furthermore, Irish whiskey experienced greater growth during 2021 than the accumulated growth that Scotch experienced over the last decade.

Responding to the news, Irish Whiskey Association director William Lavelle tipped Irish whiskey sales to overtake Scotch sales in the US by 2030, which has not happened since the introduction of prohibition in 1920.

"The resilience of the Irish whiskey category through the initial stages of the pandemic paved the way for a very strong rebound in 2021. While we saw remarkable breakthroughs in emerging markets such as India and Nigeria, these latest figures demonstrate continuing robust growth in established markets," Lavelle told the Irish Times.

Irish whiskey sales have grown in the US every year since 2002 when 434,000 nine-liter cases were sold to generate a revenue of $64 million.

The sale of higher-end Irish whiskeys has risen exponentially since 2002, with premium and super-premium brands growing by 1,112% and 9,102% respectively.

Lavelle said it was "clear" that Irish whiskey would become increasingly competitive in the higher-end whiskey market in the US, adding that it would take on Scotch over the next decade.