Celebrate the ancient Irish festival of Samhain with a truly Irish Halloween treat. 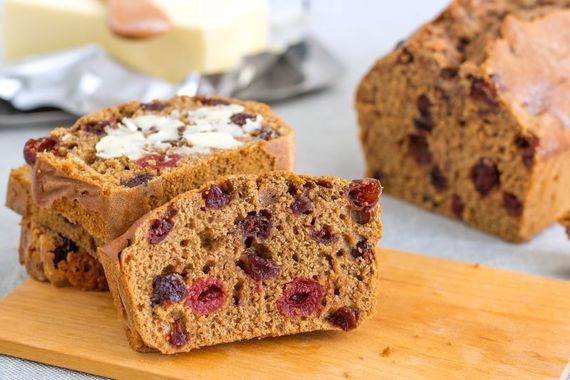 Learn a bit about Samhain and bake a bit of barmbrack! Getty

Everyone must get a slice of Irish Halloween barmbrack to see what the future holds – weddings, spinsterhood, or poverty!? Fun.

Halloween celebrated on October 31, is one of those true Celtic traditions that has become a worldwide occasion.

Historically, it is based on the Celtic festival of "Samhain" (Sawh-en) which is derived from Old Irish and means roughly "Summer's End."

With the plantation of Ulster in the early 1600s, the Scottish colonists brought with them the festival of All Hallows' Evening (All Hallows Even') celebrated on the same night and the two traditions merged. This was the night that the souls of the dead were thought to walk the earth and many people believed it a setting for supernatural encounters.

I remember how Holy Water was sprinkled on the outhouses, sheds, and farm animals to keep them safe during the night, and mirrors in our house were covered with sheets so that the poor souls could not enter the living world.

The traditional bread served on the night was the Halloween Barmbrack, meaning speckled cake, which is a sweet fruit bread. The word "Barm" comes from an old English word, "beorma," meaning yeasty, fermented liquor and "Brack" comes from the Irish word "brac," meaning speckled – which it is with the dried fruit and candied peel.

The bracks made with yeast are called "barmbracks" and those that use baking powder and fruit soaked in tea are called "tea bracks."

Each member of your family must get a slice and it was always a great treat to find the penny in the cake, as this meant you were going to be rich. Other items buried in the barmbrack are a ring for the bride-to-be, a thimble for the one who would never marry, and a small piece of cloth indicating the one who would be poor.

This is the recipe I have used for many years and it makes a one-pound loaf.

Warm the milk, add the butter and let it melt in the warm milk.

Mix the yeast with 1 tablespoon of sugar. Add half the warmed milk mixture. Add the beaten egg.

Sift the cinnamon with the flour into a bowl. Make a well in the center and pour the yeast and liquid mixture into it. Sprinkle a little flour over the liquid and leave it in a warm place for 20 minutes until the yeast froths up.

Add in the remainder of the liquid and mix the whole lot into a dough. Turn it out onto a floured board, sprinkle with the sugar, raisins, currants, and chopped peel, and knead them into the dough.

Put the dough into a butter-greased large bowl, cover it with cling wrap and leave in a warm place until doubled in size.

Knead it back again and then shape it into your greased bread tin. Brush the top with melted butter and cover until doubled in bulk again.

To give it a nice glaze, stir 1 tablespoon sugar into 2 fl oz boiling water (50ml) and brush this over the top of the loaf when it comes out of the oven and is still hot. Leave to cool before cutting.