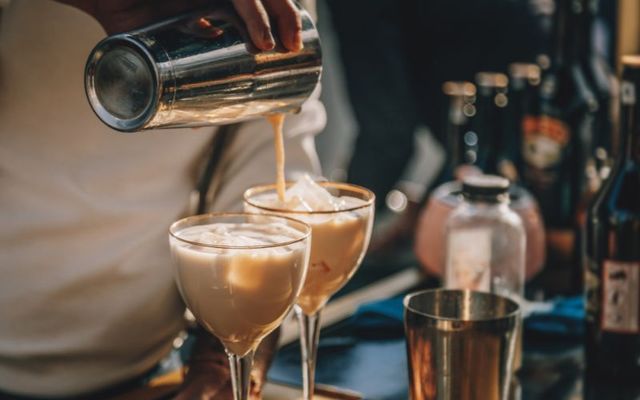 Some cocktails are designed to be sloshed back, but others are made to be the piece de resistance of a good meal; the highlight of a party.

Brady’s Milk Punch is one of those cocktails. An Irish twist on a New Orleans classic, it is smooth, creamy, and decadent – the perfect brunch cocktail or even a liquid dessert.

Brady’s Irish Cream is produced in Northern Ireland and made with dairy cream, spirit, and Irish Whiskey. Crafted in small batches in Derry on Ireland’s northwest coast, Brady’s is authentically Irish proud.

Clontarf 1014 is a triple-distilled Irish whiskey produced by the Clontarf Whiskey Company, a subsidiary of Castle Brands Inc. Originally called "Clontarf," the whiskey takes its name from the Battle of Clontarf in 1014 in which Brian Boru, the High King of Ireland, defeated an army of Vikings.

Right... now we've gotten that out of the way let's get down to the good stuff!

Strain into a punch glass

Grate dust of cinnamon over top.

If you’re already a fan of Ireland’s Legendary Clan of Spirits—including Knappogue Castle Single Malt Irish Whiskey, Clontarf Irish Whiskey, Boru Irish Vodka, Brady’s Irish Cream, and Celtic Honey Liqueur— then Brady’s Milk Punch is the cocktail for you, and it might even help you win a bit of green!