Craving the taste of Ireland? This is it right here, with a modern twist. 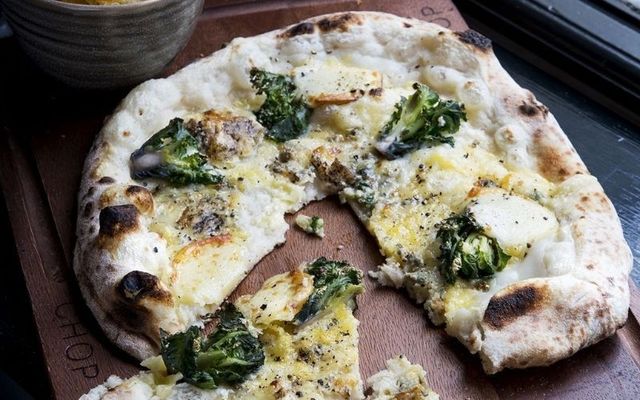 Irish cheese, potatoes and more, what else could you ask for?

Talk about comforting, wholesome delicious food made with a wonderful selection of Irish cheese on a bread made with mashed potato!

For the base (prepare 24 hours in advance):

- To make the base, put water in a bowl and add the yeast. Fluff up with a whisk until bubbles form.

- Slowly mix in the flour adding the salt halfway through. Mix in the potato. By now, you should have a nice soft dough. Cover in cling film in a bowl and leave in a warm dark place to rise.

- Divide the dough into 150g balls and lay on a lightly floured tray. Cover and leave
for 24 hours in the fridge (alternatively, leave at room temp for 8 hours).

- When ready to use, press and flatten the dough ball on a floured surface with
your fingers to form a circle. Hold the dough with your left hand while stretching with the right.

- For the topping, peel the artichokes and place them in a small pot of boiling water with
a few slices of lemon and salt. Cook until very soft and then purée in a blender with salt and pepper to taste.

- Spread on the flattened dough bases, like you would a tomato sauce on a pizza, and divide each of the three cheeses between the bases.

- Lay the greens evenly on top and bake on a pre-heated pizza stone in a very hot oven until the base looks evenly cooked and starting to color and the cheese is melted. Season and serve.

Recipe originally published in Food and Wine Ireland. Updated in 2022.