An Irish whiskey auction company is taking the country's whiskey industry by storm. 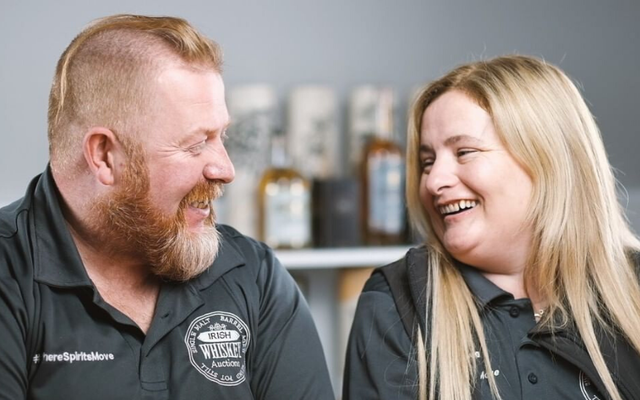 An Irish whiskey auction company is taking the country's whiskey industry by storm.

Founded in 2018, Irish Whiskey Auctions was the first whiskey auction site in Ireland and has enjoyed a meteoric rise in less than two years.

Anthony Sheehy, who founded the company along with his wife Kate in 2018, noticed a gap in the market.

Sheehy realized that there was no whiskey auction site registered in Ireland, despite a growing interest in the Irish whiskey industry.

A long-time collector of fine whiskeys, Sheehy had an epiphany in January 2018 when a bottle of whiskey he ordered was stopped by Irish customs.

A chance conversation with a whiskey proprietor in Dublin about the incident led to him making the discovery that no auction site existed in Ireland.

Seizing on the opportunity, he raced home and bought an internet domain for Irish Whiskey Auctions in addition to settling up social media accounts.

By September of the same year, the company launched its first auction.

Sheehy couldn't have believed how quickly the idea took off.

"We hoped that the first auction would have 100 bottles. We thought if we could add 20 bottles per auction we'd be doing well, but for some reason, it just took off," he said.

The company's first auction, in fact, featured 167 bottles and interest in the site has grown so much that the last monthly auction saw almost 800 bottles go under the hammer.

The website was getting 400 hits per second during its December auction and came close to crashing.

Read more: The world's most expensive Irish whiskey is now for sale

The company has grown so much that it now employs six staff, having previously been run by Anthony and Kate Sheehy alone.

Monthly auctions last around nine days and feature whiskey of all shapes and sizes, from common, store-bought whiskey to rare and highly sought-after cognacs.

One bottle of Midleton's 30th Anniversary Pearl Edition - one of just 117 bottles in the world - fetched around €15,000 in one of the site's earliest auctions.

Explaining the exponential growth, Sheehy credited a similar interest in the Irish whiskey industry that has seen more than 30 distilleries open on the island in the last decade.

"There's no point putting money in a bank anymore. They'll charge you a fee. So people take money out of the bank and put it into high-end whiskey."

Sheehy believes that bottles will continue to increase in value in the coming years as interest in Irish Whiskey continues to grow.

Since he comes into possession of such lucrative items, Sheehy and his wife have invested heavily in security to put their customer's minds at ease.

Integrity is everything, according to Sheehy, and he has also invested vast amounts of money in an online platform that enables efficient and fair online auctions. One of the features of the site includes an automatic page refresh every two seconds to ensure that bidders aren't bidding on expired prices.

Despite this continued success, it has not been easy for the Sheehys.

Anthony Sheehy operates another company and has to play a difficult balancing act that often results in him working 16-hour days. How does he cope with this enormous strain?

"I don't," he says honestly. "It's a struggle. We never anticipated this kind of growth."

A distinctive feature of the site that sets it apart from similar sites in the UK and Europe, however, is not its security, or its online platform, or its continued success, but an altogether more wholesome feature.

With the website booming, Sheehy and his wife realized that they could use their newfound popularity to do some good and started auctioning bottles off for charity each month.

Their first campaign was directed towards the Zoe Murphy Appeal - a charity that aims to help a young girl from the Sheehy's native Dundalk suffering from cerebral palsy.

John Teeling, of Dundalk's Great Northern Distillery, donated bottles of First Born to be auctioned off for charity and the Sheehys handled all fees associated with listing the bottles.

Great to be involved in such a great cause and do our small part. Don't forget you can contribute to the #zoemurphyappeal still to help make life so much better for this little lady and her fantastic family. #charity #limitededition #irishwhiskey #irishwhiskeyauction #zoemurphyappeal

The story had a happy ending and the auction fetched €2,200 (a sum matched by John Teeling) and helped the Zoe Murphy Appeal to raise sufficient funds to send her to the United States for life-altering surgery.

"We're in a blessed position and to be able to give something back is great," Sheehy said.

Irish Whiskey Auctions has since launched charity campaigns for organizations like Unicef and Pieta House - a suicide prevention charity - and Sheehy said that it will continue to host a charity auction each month.

The most recent auction featured a bottle of Aqua Vitae Batch 1, donated by Chris Hennessy and Jarod Cuffe. The limited-edition whiskey briefly sold for €55 in stores last year but fetched €320 for Teac Tom, a suicide support network based in Kilkenny.

The charity auctions consist of rare items that aren't usually available in stores, according to Sheehy.

The First Born bottle from the inaugural auction, for example, can't be found in any liquor stores, while a Tuath Whiskey glass, one of only 12 ever produced, was auctioned off for Pieta House.

Because it's not just whiskey that's auctioned each month.

A wealth of items, from antique mirrors to promotional ashtrays go under the hammer every month.

Sheehy explained that authentic mirrors are extremely hard to come by and pub owners will pay a high premium to bedeck their walls with merchandize.

Read more: Irish whiskey sales in US on the up as American spirits exports plunge due to tariffs