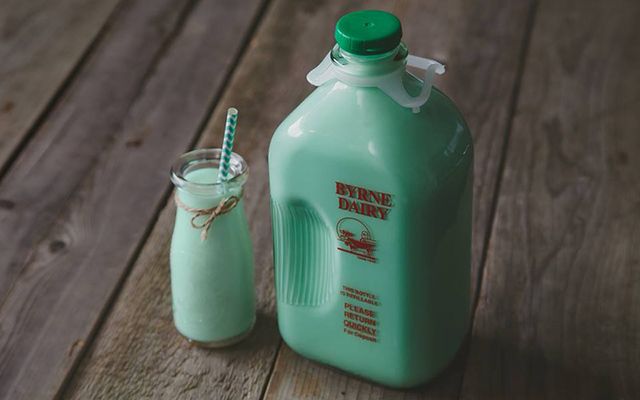 For some, March Madness means basketball, but for Irish Americans, it means “what mad things can we turn green for March and St. Patrick’s Day?” Since the 1970s, one New York dairy has easily come out on tops with the strangest thing you could possibly mix with green food dye, producing gallons and gallons of mint-tasting emerald-colored milk in the lead up to March 17.

Byrne Dairy's Oneida Street fresh milk plant in Syracuse, New York, first began producing their green milk in 1976 when the third-generation Irish immigrants thought it would be a nice way to give back to the Irish community and to show their pride in their ancestry at the same time.

It turns out their dairy-themed showing of love for their heritage was highly infectious and the green March milk has become a staple of the local community, with calls beginning as early as January to find out when they will be stocking stores with their radioactive St. Patrick’s Day tribute.

Beginning their production on February 20 and continuing up until March 14, 8,500 of the minty milk is produced in total, using whole milk sourced from local farms and adding in sugar, mint flavoring, and green dye.

To be honest, mint-flavored milk sounds much better to us than any green-tinged beer so we’re more than willing to try it out.

With the massive success of the St. Patrick’s Day version, the dairy are now even thinking of branching out from the Irish holiday and trying some new milk variations for other holidays of the year. Blueberry-flavored blue milk for the 4th of July, anyone?

You can see how they go through the green milk-making process here:

Have you ever tried Byrne’s green milk? Have an even crazier food item that’s given a makeover for St. Patrick’s Day? Let us know about it in the comments section.