Rich in antioxidants and nutrients, Irish moss has been harvested in Ireland for centuries. 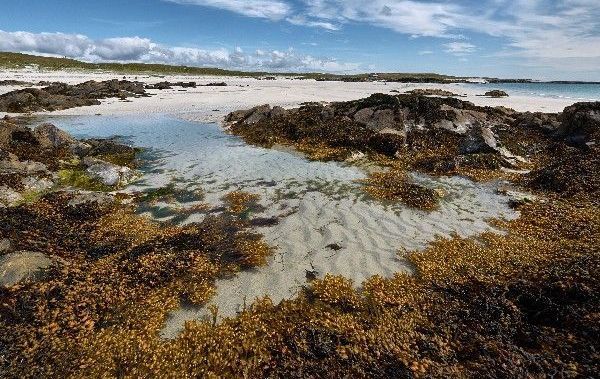 Rich in antioxidants and nutrients, Irish moss has been harvested in Ireland for centuries. Getty

Irish moss, or seaweed, has a lot of health benefits!

The first thing to know about Irish moss is that it isn’t moss at all – it’s seaweed.

Also known as carrageen (from the Irish word carraigín meaning “little rock”) and by its scientific name chondrus crispus, Irish moss is a species of red algae that grows in the cool Atlantic waters along the rocky coastlines of Europe and North America. It's also popular in Jamaica.

Exceptionally rich in nutrients and antioxidants, Irish moss is quickly gaining a reputation as the next big superfood, in line behind kale, blueberries, and fish rich in omega-3s.

The healthful properties of Irish moss include Vitamins A, E, F and K, calcium, potassium, and sulfur. It is also a naturally occurring source of iodine, which can be difficult to include in one’s diet through food alone (making iodized salt the most common source), and is especially important for supporting healthy thyroid functioning.

Rich in potassium chloride, Irish moss can work wonders for congestion and mucous and holds anti-bacterial and anti-viral properties.

It’s also thought to be good for dry skin and for skin conditions ranging from eczema to psoriasis, making it a valued ingredient for lotions and moisturizers.

The benefits of carrageen were well known to our Irish ancestors, who harvested it for centuries.

According to Seaweed.ie, the use of Irish moss in treating respiratory problems was first described in Ireland in 1810. The name “carrageen,” which, in addition to its Irish language origins may also stem from Carrigan Head in Co. Donegal was first introduced around 1830. It was especially important during the Great Hunger (1846-51) as one of the few sources of nutrition still available, at least to those living near the coast.

Irish moss, like a number of the other seaweed varieties found on the Irish coast, is harvested after the spring tides, when the water is farthest from the shore. Traditionally, harvesters venture out into the shallow waters by boat or on horseback and use long rakes to separate the seaweed from the rocks. It is then sorted and laid out in the sun to dry for up to two weeks.

For cooking, carrageen works like magic as a healthful way to thicken soups, smoothies, and puddings. It is available through many online vendors and can also be found in bunches or powdered form at most natural food stores.

If you’re feeling especially adventurous and don’t mind a faint tang of the sea, you can try out one of these recipes for Irish moss salad or seaweed bread.

If you’d rather play it sweet and safe, have a go at one of famed Irish chef Darina Allen’s all-time favorite desserts with this recipe for carrageen moss pudding with fresh raspberries and rose petals. It's a modern take on an old tradition.

It should be noted that there is some controversy surrounding carrageenan, a food additive derived from Irish moss. Carrageenan is the industry term for polysaccharides extracted from the moss and used as a thickening/gelling agent or an emulsifier in processed foods such as ice cream, cheese, deli meats, protein drinks, non-dairy milk, and kinds of toothpaste. Some studies on the long-term effects of carrageenan consumption on humans have found potential links with inflammation and digestive issues, while others have found there to be no risks associated with its consumption.

The extraction methods for carrageenan involve extensive heating and processing, and the resulting additive contains little of the same nutritional benefits as pure carrageen. So, while you may wish to avoid carrageenan as an ingredient in processed foods, pure, unprocessed Irish moss is not believed to pose any of the same potential harm.

Regardless, you can still get the external benefits of Irish moss by whipping up a batch of this lotion fit for a mermaid.

2. Measure ¼ cup of the seaweed jelly, then mix it with the aloe vera gel. Let the mixture cool completely.

3. Pour seaweed mixture into a blender and blend on low speed; slowly add the almond oil in a thin stream until blended. You will have a light, white lotion.

4. Pour lotion into a clean container. To use, massage a small amount into your skin.