How the most Irish town in America was built on seaweed

This is the very Irish story of how an Irish immigrant created an Irish moss enterprise in Scituate, MA, the most Irish town in America. 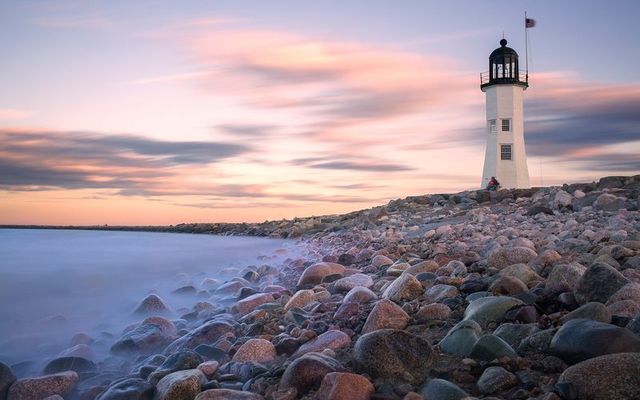 Not many people know that the most Irish town in the United States is Scituate, Massachusetts. Even fewer know the fascinating history of how an Irish immigrant built up the town's economy by harvesting a kind of seaweed known as Irish moss.

This is the very Irish story of how an Irish immigrant created an Irish moss enterprise in the most Irish town in America.

The town is Scituate, about 30 miles outside of Boston, which according to the 2010 census has a nearly 50% Irish population. But this was not always the case. Back in the 1840s, there weren't any Irish living there until a man named Daniel Ward spied a familiar sight as he navigated his fishing boat through Scituate's waters.

It was Irish moss. Also known as carrageen (from the Irish word carraigín meaning “little rock”) and by its scientific name chondrus crispus, Irish moss is a species of red algae. A binding, thickening, and emulsifying agent, carrageenan, a product derived from Irish moss, is today found in a range of health, beauty, and food products. Back in Ward's time, it was used in Ireland in foods and beers.

The Smithsonian magazine recently published a wonderfully in-depth article all about how Ward's Irish moss encounter went on to shape the community, economy, and history of Scituate.

As they reported, Ward and his friend Miles O'Brian quickly realized the potential to establish an Irish mossing business in Scituate. This coincided with mass immigration from Ireland during the worst years of Ireland's Great Hunger, after which some Irish caught wind of Ward's business and came to Scituate.

Read More: Learn about the health benefits of Irish moss

“By 1870 there were close to 100 Irish families... [and] by the early 1900s other Irish families that maybe weren’t harvesting the moss, but had relatives that were, knew about the town and moved here,” Dave Ball, president of the Scituate Historical Society, told Smithsonian Magazine's Emily Toomey. “You can trace the roots of the whole influx back to Irish mossing.”

Back in those days, Irish moss was harvested individually and by hand, with "mossers" as they were called, paddling out in dories and using rakes to carefully extract the tops from the Irish moss. Back on the beach, their wives and children would then tend to the moss as it dried in the sun.

The Irish moss industry experienced a particular surge during WWII when agar, a thickening agent produced in Japan, was no longer accessible to the Allied countries. During this time, Irish mossing also became a popular enterprise in Canada, especially in the Prince Edward Islands. Mimegash, for example, claims to have been the "Irish Moss Capital of the World."

WWII also led more women to work as mossers. Toomey notes that in addition to working out of necessity, they were likely also inspired by Scituate's "Irish Mossing Queen" Mim Flynn, who began harvesting Irish moss on her own when she was only nine years old, despite the protestations of her socialite mother. Flynn was the subject of newspaper stories across the US and Canada.

Demand for Irish moss peaked post-WWII as major American companies began purchasing to produce carrageenan.  But in the decades leading up to the end of the 20th century, technological advancements and the advent of seaweed farms in Southeast Asia brought about the decline of the mossing industry in the US and Canada.

Read More: The most Irish town in America may lose its St. Patrick's Day parade

And that included Scituate. As Hank Hickman, a former mosser who has written two books on the topic, told Smithsonian, the Irish moss business in Scituate started fizzling with the death of the last "Irish moss king" Lucien Rousseau in the 1980s and ended entirely in 1997.

Today, the town's Maritime and Mossing Museum still hosts mossing reunions and has a wealth of information. While Irish moss may no longer be integral to Scituate's economy and livelihood, it the thing that made the town the most Irish in the US.