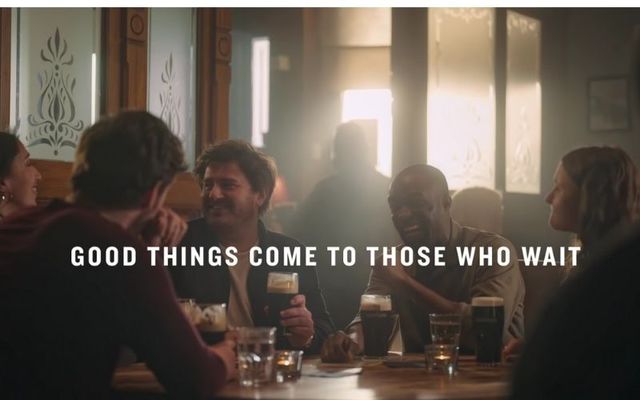 The new Guinness campaign welcomes the reopening of indoor pubs in Britain on May 17. Guinness YouTube

Guinness has launched an endearing campaign to celebrate the reopening of pubs in the United Kingdom, highlighting what everyone missed over the last year of lockdowns and closures.

The #LooksLikeGuinness campaign features a 40-second video of everyday items that somewhat resemble a pint of the black stuff, including a pair of black and white football socks and a black and white bollard by the sea.

A cover of Elvis Presley's famous hit "Always on my Mind" plays in the background as the objects appear on screen to symbolize what people missed out on while pubs were closed over the past year.

The video ends with a group of friends enjoying a pint of Guinness in a pub in a scene that recalls happier times before the pandemic brought everything to a standstill.

"Good things come to those who wait," the video says in a fitting caption.

In the closing seconds of the video, Guinness owners Diageo reminds the public of the money that it has invested in the British pub trade.

Neil Shah, the head of Guinness Great Britain, said that the company wanted to make the reopening of indoor pubs in Britain on May 17 as "successful as it can be".

"We’re pleased to be able to mark this monumentous occasion with the #LooksLikeGuinness campaign—the reopening of the pubs has been a long time coming but as we say at Guinness, ‘Good things come to those who wait.'"

The #LooksLikeGuinness campaign will run nationally in the UK on TV and online, while social media channels will ask Guinness lovers to submit images of objects that resemble a pint using the campaign hashtag.

Guinness will be delivering 30,000 PPE kits to pubs across the UK as part of the campaign and will also begin a £1 million pledge to support British bartenders.