A nourishing groundnut stew made with a touch of extra flavor from Guinness Foreign Extra Stout. 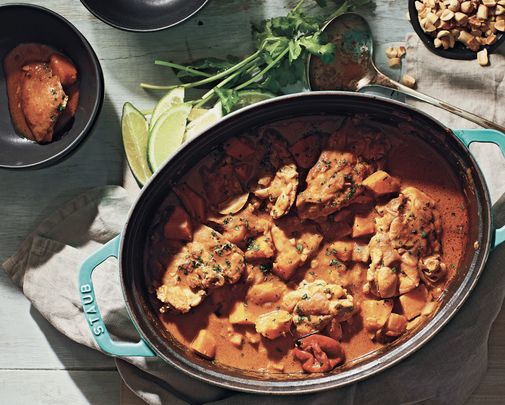 This recipe is inspired by Nigeria, one of the biggest drinkers of Guinness, who also happen to be the world's largest producer of groundnuts or peanuts.

First brewed in 1801 (as West Indies Porter), Guinness  Foreign Extra Stout was designed for export with extra hops and alcohol to help it withstand long journeys by ship. It’s been such a favorite in Africa that Guinness’s first overseas brewery outside Ireland and the UK opened in Nigeria in 1963. Nigeria is also one of the world’s largest producers of groundnuts or peanuts, and this groundnut stew, with a touch of extra flavor from Foreign Extra  Stout, is an homage to the beer’s popularity in Africa.

Serve with steamed rice or couscous.

Season the chicken with salt and black pepper. In a large skillet over medium heat, heat 1 tablespoon of the vegetable oil until it shimmers. Add the chicken and brown on all sides, 10 to  12 minutes. Remove chicken from the pan and set aside. Remove excess oil from pan.

Heat the remaining 1 tablespoon oil in the same pan over medium heat. Add the onion and cook for 8 to 10 minutes,   until soft and brown. Add the ginger, garlic, and tomato paste. Cook, stirring, for 5 minutes, then whisk in the peanut butter, stock, and stout.

Return the chicken to the pan and turn the heat to low. Pierce the chile with a knife (so that it contributes flavor rather than heat) and add it and the sweet potatoes to the pan. Cover and cook for about 25 minutes, until the chicken is cooked through, or until a meat thermometer reads 165°F (75°C), sweet potatoes are tender, and the sauce has reduced slightly. Remove and discard the chile (unless you want the heat). Sprinkle the stew with peanuts and cilantro, and serve with lime wedges.

From savory braised short ribs to traditional Guinness soda bread to decadent cheesecake brownies, this comprehensive book from Caroline Hennessy – Chair of the Irish Food Writers Guild – includes over 70 recipes for dishes that feature or pair with the stouts, ales, and lagers of the Guinness breweries. This is the first-ever officially licensed cookbook from Guinness.

Insight Editions released The Official Guinness Cookbook,  a deluxe gift set, this March, that includes the cookbook and an exclusive Guinness apron – the perfect gift for the Guinness-loving cook in your life.