Goldie Hawn is a big fan of the scientifaclly-developed "magic poo bread" from Irish baker Karen O'Donoghue, the founder of the Happy Tummy Company. 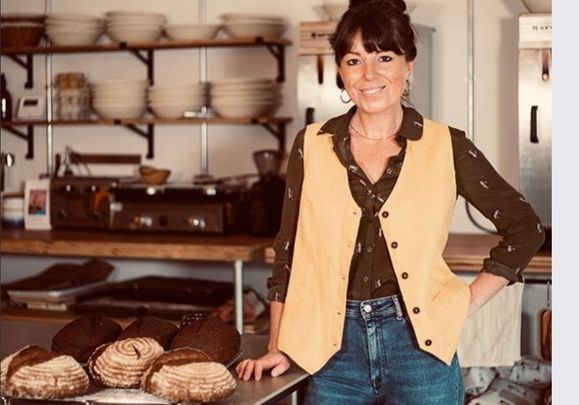 O'Donoghue, who founded the Happy Tummy Company in 2014, is leading a food-based approach to healing and managing the body.

She is responsible for creating a scientifically-developed range of bread aiming to alleviate health issues including mental health problems and menopause pain, while US actress Goldie Hawn claims that it has cured her IBS.

Hawn took ten loaves back to the States and said that it helped cure both her and her son of the condition.

In a testimonial on The Happy Tummy's site, in late Nov 2021, Hawn said: "I'm so happy with The Happy Tummy Co. I CAN'T HANDLE IT!! IT'S AMAZING SO GOOD THAT I CAN'T STOP EATING IT! My son Wyatt too! Already imagining my last piece! :("

O'Donoghue told the Irish Examiner that she started the bread-making process to help cure her own IBS but said that demand increased exponentially among fellow sufferers of the condition once word got out.

"The older I got and the more my IBS became an issue, I knew I needed to go back to that ambition I had as a little girl. Intuitively I always knew that food is medicine," she told the Irish Examiner.

O'Donoghue developed what her customers describe as "magic poo bread" over the course of 18 months in her London flat, using an Ethiopian grain called teff to create her winning formula.

Found in the Ethiopian highlands, teff is high in protein, calcium, and iron and helps to stimulate the growth of good gut bacteria when added to prebiotic fibres and antioxidants. It also relieves constipation, reduces inflammation, and helps to nourish the brain, lungs, and skin among other positive health benefits.

The effect was instantaneous for O'Donoghue, who went from having a bowel movement every three weeks to two every day.

O'Donoghue, who was named Gut Specialist of the Year in the UK in 2018, told the Irish Examiner that a healthy gut does not just help a person's bowel movements; it also positively impacts every system and organ in the body.

"Every system and organ in the body is dependent on the health of the gut microbiome so when you nourish the microbiome, it automatically nourishes the brain," she said.

The expensive list of ingredients coupled with the arduous baking process leaves O'Donoghue's popular loaf with a cost of €25, but O'Donoghue insists that customers are happy to pay for such a healthy product.

"I know it’s generally not politically correct to go so hard on this organic way of eating because people will argue that it is elitist, privileged and only a certain percentage can afford organic food," she told the Irish Examiner.

"But when I had the bakery in Hackney we had loads of customers who were on the breadline buying our bread because they fundamentally understood the importance of organic, wholegrain food in their diet."

She said that she has had to "fight" an industry that has fooled people into believing that good food can be made cheaply.

O'Donoghue relocated her Happy Tummy Company headquarters to Westport in County Mayo last year and will launch her Chia Teff Loaf in Ireland later this month.

She also runs baking classes at Teach Scoile in Westport to educate people about the benefits of teff.

Got a craving? These Irish comfort foods will hit the spot

The Butter Museum in Co Cork, a hidden gem for Irish history buffs