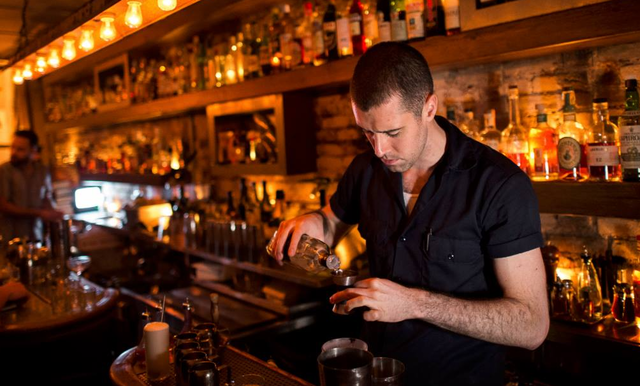 A New York bar co-owned by a Belfast bar has been voted the best bar in North America.

Owned by Belfast native Michael McIlroy and his business partner Sam Ross, Attaboy is located at the site of the former iconic Milk and Honey cocktail bar, where Ross and McIlroy first met.

The pair became world-class cocktail makers at the famous establishment under the direction of Milk and Honey owner Sasha Petraske, saving up tips to open Attaboy once their former mentor moved his business to a new location in 2013.

Attaboy can only seat 28 customers at a time but has built up a reputation as one of the coolest bars in New York thanks to its bespoke cocktails and speakeasy vibe.

McIlroy, 39, who moved to New York from Belfast 20 years ago, said he and Ross were "humbled" to top the inaugural list.

He told the Belfast Telegraph that the bar achieved its success without PR campaigns or investment, adding that they opened it on a shoestring budget.

"We don’t have the gimmicks that other bars go for," McIlroy told the Belfast Telegraph.

"We don’t even have a cocktail menu. When people come into the bar, we ask them what flavors they’re into and what alcohol they like and make a bespoke cocktail for them."

"Before they come in, we have to ask them how many people are in their party, because the bar is so small and only seats 28."

The Handshake Speakeasy and Licorería Limantour - both located in Mexico City - make up the top three on the new list.

In all, the ranking features 29 bars from the US, 11 from Mexico, eight from Canada, and two from the Caribbean.