'Wee Irish Pub' on wheels can be delivered to your door 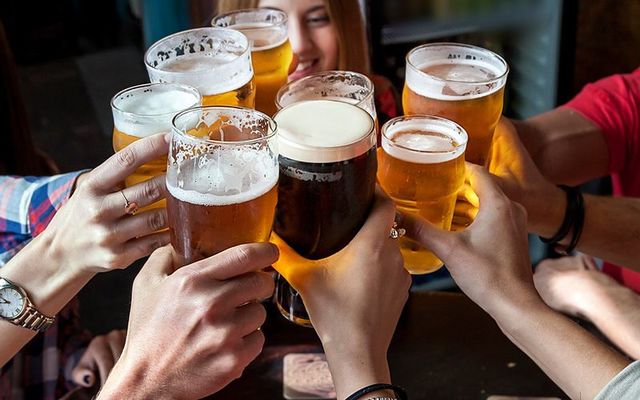 Celebrate any occasion with the "Wee Irish Pub" which can be delivered straight to your door. Getty

This authentic miniature Irish pub on wheels is the perfect pandemic-era solution for your next event.

Two brothers from Reading, Massachusetts, have created the "Wee Irish Pub," a 7 foot by 17 foot traveling pub complete with bar, taps, benches, and Irish décor that can fit up to 12 people inside.

Craig and Matt Taylor initially came up with the idea as a pandemic hobby, reported the Boston Globe. They thought a small traveling taproom that could be rented for private events and parties would let people enjoy the cozy comforts of an Irish bar with their family and friends.

However, when the brothers launched the "Wee Irish Pub" in September 2021, they were inundated with requests. Within days they realized their business venture was going to be much more than a part-time gig.

“The floodgates have opened,” said Craig, 58. “We are getting requests [to rent it], at least two an hour, for the last week.”

Craig, who works in marketing, had the idea of building a mobile pub some years ago, after reading about an inflatable bar that people could rent for a day and set up in their own backyard.

“I had been talking about it sort of as a pipe dream that would never happen,” he said.

But then as the pandemic surged, the brothers started discussing the idea as a real possibility.

“We’d talk about it night after night,” said Matt, 49, who works in IT. “Finally it was like, ‘Alright, let’s just do this.’ It’s kind of the perfect pandemic project because people were having backyard get-togethers and staying outside, and we said, ‘Yeah, this would be perfect for this situation.’”

They ordered a large trailer for the pub to be built on, so it could be towed from place-to-place and got to work on the construction with some help from family members.

Inside, they installed a small bar with a refrigerator and taps for kegs. To give the pub an authentic look and feel, the brothers used repurposed old furniture and materials sourced from online marketplaces such as Craigslist. Details such as a Sláinte sign and a framed map of Ireland were hung on the walls.  Behind the benches, they placed a  plaque dedicating the project to Craig’s late father-in-law, who was of Irish descent.

The Wee Irish Pub had its first event, for a company gathering in Melrose, in  September. The bookings haven't stopped since.

“For me, it was, ‘Hey this could be a retirement gig in a few years,’” Matt said. “Now it’s starting to look like this would be a job that we could just do — it could be our livelihood.”

Matt said they are thinking of creating a traveling Boston sports bar next.

The "Wee Irish Pub" can be delivered up to 30 miles away from the company's base in Reading.

Rentals cost between $800 and $1,200 per day, with the brothers arriving to help with the set-up in the afternoon and taking it away the following day.

The bar does not come stocked with alcoholic beverages, but the company, which is officially named "Tiny Pubs," will refer customers to a bartending service if needed.

For more information and to book the 'Wee Irish Pub' visit TinyPubs.com.